Filmed over a 2 year period, ‘The Battle’ captures a moment in British history; chronicling efforts to bring about reform and change. Chris Baldwin and friends opened a Dutch-Style coffee-shop (in Worthing, West Sussex),  with soft drinks and Cannabis on the menu.

Chris’s story is remarkable; a man on crutches standing up to the might of the British government. ‘The Battle’ follows his journey into unknown territory, and documents his smuggling of Marijuana into the UK. Challenging border control,  Chris is prepared to sacrifice personal liberty for his belief in individual choice….. 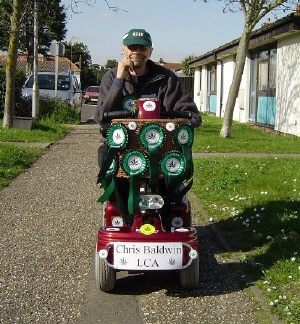 His aim was to prove that society is ready and able to offer a comfortable environment for like-minded people, to provide clean, affordable Cannabis to an ever expanding community- for both recreational and physically challenged users. We captured the journey of his first coffeeshop ‘Bong Chuffa’ ;the highs and lows.

Chris Baldwin’s story is a moment in history that will likely never be repeated, and it would be a shame for it to go unseen.

Filming ‘The Battle’ was indeed a battle in more ways than one; We invested so much both financially and emotionally, but believe the result was worth all the heartache.  Thanks to the subject matter, no film festival was prepared to air it, and doors have been closed in all directions.