In forty years, the War on Drugs has accounted for more than 45 million arrests, made America the world’s largest jailer, and damaged poor communities at home and abroad. Yet for all that, drugs are cheaper, purer, and more available today than ever before. 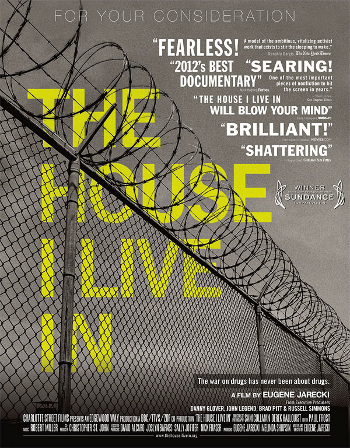 Filmed in more than twenty states, THE HOUSE I LIVE IN captures heart-wrenching stories from individuals at all levels of America’s War on Drugs. From the dealer to the grieving mother, the narcotics officer to the senator, the inmate to the federal judge, the film offers a penetrating look inside America’s longest war—a definitive portrait revealing its profound human rights implications.

The film recognizes the seriousness of drug abuse as a matter of public health, and investigates the tragic errors and shortcomings that have meant this symptom is most often treated as a cause for law enforcement, creating a vast machine that largely feeds on America’s poor, and especially on minority communities. Beyond simple misguided policy, the film examines how political and economic corruption have fueled the war for 40 years, despite persistent evidence of its moral, economic, and practical failures.

Statment from the director Eugene Jarecki

I have been thinking about making this film for over 20 years.

I first met Nannie Jeter, a prominent character in the film, when I was just a few days old coming home from the hospital. From that day on, she became a second mother to me, and her children and grandchildren a second family. I am white and Nannie and her family are black, and growing up in the wake of the civil rights movement, I think I imagined we were all living in a post-racial America—a place of greater equality and justice. Yet, as we grew older, our paths diverged; where I found privilege and opportunity, Nannie’s family found a new kind of struggle that re-emerged with a vengeance for black Americans in the post-civil rights era.

When I asked Nannie what had happened, she felt that it was chiefly the rise of drugs in America that had ravaged the lives of people in her family. But the more I talked to experts, the more I heard the same thing: whatever damage drugs do to people has been made far worse by the laws America has enacted to stop them. Suddenly, the socalled “War on Drugs” began rising into view as something I had to investigate and better understand. I wanted to know what it was that had most fundamentally hurt people I love.

With this in mind, I began interviewing people across the country whose families had been pulled into a vicious cycle of drugs and the criminal justice system. Alongside dealers, users, and their family members, I spoke to police, wardens, judges, medical experts, and others to begin to understand how it was that America came to launch a war against its own people.

I interviewed experts who broadened my understanding of the subject in ways I wanted to share with others. I learned that drug abuse is ultimately a matter of public health that has instead been treated as an opportunity for law enforcement and an expanding criminal justice system. I spoke with scientists desperate for a drug policy based on data rather than rhetoric. I saw how this misguided approach has helped make America the world’s largest jailer, imprisoning its citizens at a higher rate per capita than any other nation on earth, and how the drug war has become America’s longest war, now entering its 40th year and costing more than a trillion dollars to date.

For people to understand the scale and urgency of this crisis, I felt that facts, figures, and expert testimony weren’t enough, so I sought out individuals whose lives were directly and deeply shaped by the War on Drugs, hoping their stories would reveal some of the everyday tragedies left in its wake. Ultimately, with my beloved Nannie Jeter as inspiration, THE HOUSE I LIVE IN grew into a larger examination of race, class, and capitalism in America—of a tragically misguided system that preys upon the least fortunate among us to sustain itself.