A compelling documentary supporting the legalization of marijuana. LOS ANGELES (July 20, 2011)‐ The war on drugs has been an uphill battle for decades but recent legislation , which was modeled after the Repeal of Alcohol Prohibition, could very well end prohibition against marijuana. The National Organization of the Reform for Marijuana Laws, also known as “NORML”, has been a forefront leader on this issue along with many of its standout supporters. On August 16, 2011, Cinema Libre Studio proudly releases A NORML LIFE on DVD which tells the story of the advocates fighting for the legalization of cannabis. 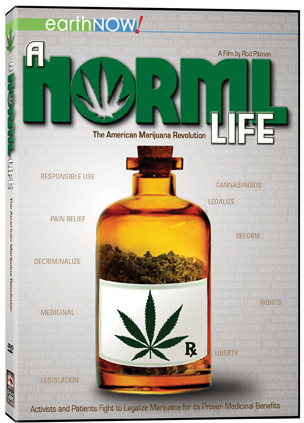 A NORML LIFE, directed by Rod Pitman and produced by Doug Ross, is based on the principals that the nonprofit organization NORML holds. The documentary presents the infamous case that the use of medicinal marijuana is effective and that it is a safe alternative to pharmaceutical medicine. Through first hand interviews with physicians, patients suffering from chronic illness and a great amount of evidence provided by clinical case studies—the filmmakers prove that there are in fact both physical and psychological benefits produced by marijuana that dramatically affect a patients condition.

In the film we meet NORML founder Keith Stroup, ESQ and NORML’s Executive Director Allen St. Pierre whom are both widely known in the media as leaders in the movement for marijuana policy reform. Jodie Emery, the activist and wife of the “Prince of Pot” Marc Emery, appears in the film leading the “Free Marc” campaign and fighting to appeal her husbands conviction for marijuana trafficking— while carrying on Marc’s mission to “Plant the Seeds of Freedom and Overgrow the Government”. This is in hopes that one day people will be able to grow their own cannabis for medicine. We also see Independent candidate for Governor of Kentucky, Gatewood Galbraith, whose determination and strive is a force for cannabis advocates everywhere. Other personalities from all walks of life share their views on the benefits of marijuana and the challenges they face to legalize it.

Rod Pitman has produced television shows, music videos and the recently released film HEMPSTERS: PLANT THE SEED, also distributed by Cinema Libre Studio. Doug Ross, founder of Honolulu Municipal Television, is a recognized video professional who has worked on acclaimed projects such as Global View series on History Channel International and China: Engineering an Empire on History Channel. These two men, who have known each other for approximately 50 years, collaborated on this project to carry out the repeated message from the personal stories of these activists: when western medicine fails and the only solution to end pain and suffering is medicinal marijuana then something needs to be done to end the war on drugs.

SYNOPSIS: NORML or National Organization of the Reform for Marijuana Laws has long advocated for the decriminalization of cannabis for over 40 years. Its founder, current leaders and nationwide chapter representatives describe the patchwork of state and municipal laws that allow the sale of medical marijuana, while the federal government still regards cannabis as a dangerous narcotic.

Voters in the U.S. are increasingly recognizing the positive aspects of accepting and controlling medical marijuana in their communities for its medicinal benefits, as well as for its potential to generate needed tax revenue.

Hear personal stories and testimonies to the efficacy of medicinal marijuana from those who are suffering from chronic illnesses. To what extent should we allow the government to legislate over personal freedoms and liberties with regard to our health and treatment?