Friday, 3 February 2023
You are here: Home AKA Tommy Chong

a/k/a Tommy Chong is a dynamic portrait of comedy legend Tommy Chong of Cheech and Chong set against the unfolding political horror story of post 9/11 America.

Filmmaker Josh Gilbert follows the tragic and absurd tale of Chong as he travels down the rabbit hole of Americas war on drugs and the federal prison system after becoming the primary target in a government sting, code named Operation Pipe Dreams. 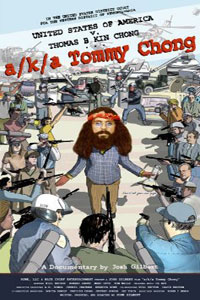 In February of 2003, at a time of unparalleled assaults to our freedom by international terrorists, John Ashcroft and U.S. Attorney Mary Beth Buchanan spent 12 million dollars to take down Tommy Chong for selling art glass water pipes, a/k/a bongs, over the internet.

What emerges is an intimate portrait of a cosmic character, caught in the crosshairs of a surreal Cheech and Chong fantasy come to life.

Grammy award-winning comedian Tommy Chong is legendary for his invaluable contribution to American counterculture as part of the comedy team Cheech & Chong. During their reign, Tommy Chong and Cheech Marin recorded six gold comedy albums, including the 1974 Grammy winner Los Cochinos, and starred in seven successful films, most of which Chong co-wrote and directed: Up in Smoke (1978), Cheech & Chongs Next Movie (1980), Nice Dreams (1981), Things Are Tough All Over (1982) Still Smokin (1983), The Corsican Brothers (1984), and Get Out of My Room (1985). Garnering hundreds of millions at the box office, these films remain huge video rentals and appear regularly on television. Chong went solo in 1990s Far Out Man, which he wrote and directed. He has appeared in over twenty movies with screenwriter, director, and producer credits to his name. As a testament to his enduring popularity, the September 1998 issue of High Times magazine featuring Chong on the cover was one of their bestselling issues to date, outselling cover issues featuring George Carlin, Kurt Cobain, and Jerry Garcia. Chong had a recurring role as Leo on the Fox Networks That 70s Show. In 2006, Chongs book The I Chong: Meditations from the Joint became a bestseller.