Cannabis Culture Magazine will be ceasing publication of its print version and moving to an entirely online format due to increasing financial constraints, the prospect of further economic downturn, and the increasing obsolescence of print media in a digital world.Watch for some major changes in the near future as we transform CannabisCulture.com into a revamped marijuana super-site.

Message from Cannabis Culture Publisher and Editor-In-Chief Marc Emery:  I have decided to cease publication of Cannabis Culture Magazine’s print version and move to an entirely online format. Magazine advertising and circulation are predicted to fall off in the near future and matters will get worse if I continue to print a paper edition. 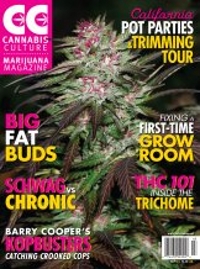 Soon afterward, magazine distributor Anderson News – who handles 25% (about 12,500) of our magazines that go to newsstands – went out of business. This was terrible news for all magazines, as Anderson News was one of the largest publication distributors in North America. That news led to our main distributor, Disticor, ordering 9,000 fewer copies of #75 (had we printed it), meaning our immediate future sales on newsstands would have been severely reduced. Ultimately, each issue lost about $35,000 to $45,000, and my Cannabis Culture Headquarters store in Vancouver, BC was forced to pay for the losses. That was an unsustainable burden we cannot afford going into the future.

Cannabis Culture Magazine began as the Marijuana & Hemp Newsletter (then called Cannabis Canada, then renamed Cannabis Culture) in 1994, the year the World-Wide Web debuted. In those days, all information about marijuana, hemp and our culture was available only in the monthly High Times Magazine and nothing else. We were the first web site (HempBC.com) in the world about cannabis, appearing in November 1994, and in January 2000, we began the very first cannabis video streaming website (www.Pot.tv) online.

Now there are thousands of websites devoted to cannabis information, photography, commentary, grow information, and political news on an hourly or daily basis. Our magazine, appearing once every eight weeks, simply cannot stay abreast of current events and the modern-day demand for immediate news and material. Our organizations are often being quoted, but the references are from our online material and archives, videos, movies, TV interviews and other multi-media. At the same time, feedback has dropped from readers and the effort to produce a print copy of CC Magazine required enormous manpower and a small Canadian forest for each issue.

The future of all print media is bleak. Many magazines and newspapers could go out of business by the end of the year, including The National Post, Sports Illustrated, Maxim, and many others. Check out the latest Sports Illustrated; it has only 10.5 pages of advertising in the entire issue. TIME Magazine has only eight pages of advertising. Magazines rely on advertising, and as the economy worsens, companies are not able to afford ads like they used to. The digital age is truly the future. Magazines don’t have nearly the impact they once did, because all information is available faster and free online. Our www.CannabisCulture.com website gets a huge number of visitors and readers – much more than the magazine ever did – so that’s where we will put all of our effort. It’s clear that printed media is no longer sustainable or effective. If we focus on our online presence, we can raise revenue and be more efficient and competitive with information. We will continue our pioneering ways by taking advantage of our Pot-TV video capabilities and our extensive contacts and reputation around the world.

Here’s a breakdown of CC Magazine’s unsustainable costs. Of the 62,000 printed for #73, only 35,000 sold, meaning 27,000 got destroyed (which is typical with magazines, but very environmentally unfriendly). Now, with chaos in our distribution system, our potential sales would drop to under 30,000. The circulation revenue for that is a disappointing $44,000 per issue; advertising revenue is only providing $30,000 per issue, but it costs $64,000 to print 62,000 copies. It’s another $10,000 to ship to distributors, stores and subscribers. Those costs are covered by revenue from all sources, but the cost of producing the magazine is approximately $16,000 for material (writers and photographers), $32,000 for the staff of six people who work in 8-week cycles to produce the magazine, $4,000 an issue in promotion, posters, subscription cards, and much more that were not covered by revenue the magazine generated. Subscriptions never made money, and we never had more than 1,400 subscribers at any one time. Each magazine cost about $2 each to produce, plus 60 cents to ship in Canada, $1.50 to ship to USA, $3.00 abroad. Envelopes and packing took another 25 cents per issue.

This huge cost of producing CC Magazine has meant our retail stores and mail order have had to pour $20,000 into the magazine each month for the past 3.5 years – ever since the Marc Emery Direct Seed catalog was canceled from CC Magazine in July 2005 (after the US Drug Enforcement Administration raided my seed business and set me up for extradition to the US – please see www.NoExtradition.net if you don’t know this story, and to help me fight to stay in my home country Canada). When I had the seed business, I paid $35,000 for my 12-page catalog to appear in each issue. In those days, CC Magazine had 20 pages of additional advertising that produced $30,000, so combined, advertising generated $65,000 per issue. We’re done our best to keep CC Magazine alive, but it has been a growing revenue drain.

All subscribers will get a credit in the mail worth 25% more value than what we owe you for the remainder of your subscription. The credit is redeemable for merchandise from the CC Mail Order catalogue, CC online store (www.CannabisCulture.com/store) or in our CCHQ store (307 West Hastings Street, Vancouver BC, 604-682-1172). If there is no merchandise you would like to receive, then we will reimburse your remaining subscription money.

I am extremely proud of our 15 years of publishing Cannabis Culture in print. Our activist publication inspired so many people, and did numerous good things for the movement. We will continue to devote our time to changing the world and ending the war on drugs. Our Cannabis Culture and Pot-TV websites, the CCHQ retail store, the BC Marijuana Party, and CC’s online mail order will all continue – and they will be able to do even more now that CC Magazine’s losses won’t be subsidized. It is the end of an era, and I know many readers will miss CC Magazine, but it’s also a new beginning. I hope you join us on our journey into the future.

Thank you for your support over the years.