Great excitement greeted the launch of Shiva Skunk Feminized, the carefully stabilized feminized version of one of Sensi’s oldest and most popular cannabis seed strains.

Originally released back in 1987 as NL #5 x Sk #1, Shiva Skunk is widely regarded as being one of the best Indica dominant varieties to come out of the 80s. Those in the know immediately recognised that a cross of Northern Lights #5 and Skunk #1 was a cannabis hybrid to be celebrated, acquired and treasured. Officially named Shiva Skunk in honour of Shiva, the Hindu god who is also known as the Lord of Bhang (cannabis), this Indica dominant strain is the strongest of Sensi’s family of Skunks. 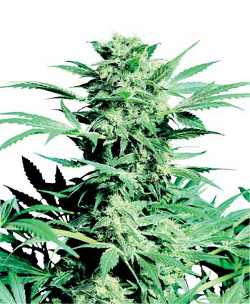 Shiva Skunk Feminized embodies the qualities of strength, yield and flavour that make her parents legendary the world over. Thanks to hybrid vigour attained through expert selection and breeding, feminized Shiva Skunk is able to surpass both Northern Lights #5 and Skunk #1 in both resin production and yield. This stable, feminized super-hybrid develops a prolific amount of buds, which by the end of the flowering period have grown and solidified into impressive flower structures heavily coated with large, juicy resin glands.

Viewing a lush crop of feminized Shiva Skunk ready for harvest is enough to convince most people why this is one of Sensi’s most loved ‘oldschool’ strains, and the effect and flavour definitely confirm this assessment. The deep earthy musk of Northern Lights #5 is brightened by a citrus sweetness from the Skunk #1 side of the family, producing a complex, sophisticated bouquet that is quite rare in Indica hybrid strains.

When consumed, feminized Shiva Skunk has reliably powerful and long-lasting effects that can vary according to the individual. For some, the scarlet eyes, giggling and ebullience associated with Skunk #1’s Sativa heritage will emerge; for others, the peaceful introspection and insight granted by NL #5; and there have even been anecdotes of people filled with the urge for action and creativity! The ‘magic formula’ of NL #5 x Sk#1 is just as potent in the feminized Shiva Skunk seed strain, an exceptional classic cannabis hybrid that will be especially appreciated by connoisseurs of either, or both, parent plants.