José “Pepe” Mujica shot back on Friday at the president of the International Narcotics Control Board, a U.N. agency, for saying that his administration refused to meet with the agency’s officials before legalizing marijuana this week.

Mujica batted down the criticism, insisting that his administration is open to discussing the law and accusing the INCB President Raymond Yans of applying a double standard by criticizing Uruguay, even as U.S. states pass laws to legalize recreational marijuana consumption. 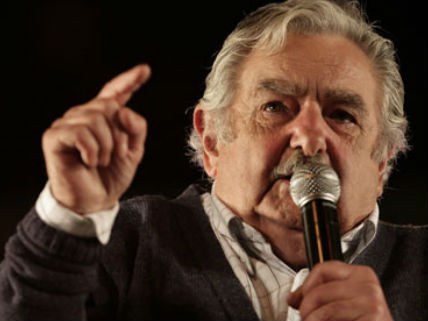 “Tell this old guy not to lie,” Mujica told reporters, according to Colombian daily El Espectador. “Any guy in the street can meet with me. Let him come to Uruguay and meet with me whenever he wants… He thinks that because he’s in an international position, he can tell whatever lie he wants.”

Yans had said that the law passed by the Uruguayan legislature this week legalizing the consumption and government-controlled production and sale of marijuana would violate the 1961 Single Convention on Narcotic Drugs, which Uruguay has signed.

The INCB president said on Wednesday he was “surprised” that the Uruguayan government “knowingly decided to break the universally agreed and internationally endorsed legal provisions of the treaty.

But Mujica dismissed the criticism as a double standard, pointing out that the U.S. states of Colorado and Washington have already legalized weed and that both of the states’ populations individually exceed Uruguay’s 3.4 million inhabitants.

“Do they have two discourses, one for Uruguay and another for those who are strong?” Mujica asked.

Uruguay’s Senate gave its final approval Monday to a law legalizing the consumption of marijuana creating a government-controlled market for the soft drug’s production and sale. Those wishing to smoke marijuana recreationally must register with the government and limit their intake to 40 grams per month, or whatever they can reap from up to six plants they may grow at home.

Mujica and his supporters argued that regulating marijuana consumption and production would take the profits out of the hands of criminals, rather than continuing using soldiers and police to enforce a prohibition policy that fails to keep people from smoking weed.

The United States has largely refrained from publicly criticizing Uruguay’s actions, though State Department Spokesman Pooja Jhunjhunwala also said the new law would violate the 1961 U.N. convention on drug control in comments to the Washington Post.

But Uruguay’s president said he’d faced international pressure, including from neighboring Brazil, for pushing ahead with his effort to end marijuana prohibition.

“There’s always going to be pressure,” Mujica told Brazilian daily A Folha de São Paulo before the law passed. “There’s an apparatus in the world that lives by repressing, and it costs a lot of money.”

By By Roque Planas
Source: huffingtonpost.com