The US government has already approved Marc’s transfer home, but Conservative Public Safety Minister Steven Blaney has not responded to requests or addressed the issue publicly. 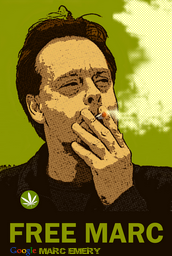 You can read aloud the following (either to the secretary who will answer the phone, or to the voice mail recording) or you can say something similar, based on how you feel about what has happened to Marc – but please remember to always be polite! And if you ask for an official response (which will require you leave your contact information) the office staff will have to use time and resources to reply, so they might be more inclined to tell the Minister to approve Marc’s transfer so they can get back to their normal workload!

“I’m calling to leave a message with Public Safety Minister Steven Blaney. I am requesting that he approve the prison transfer request of Canadian Marc Emery, who has been imprisoned in the United States since 2010. The Minister has had Marc Emery’s transfer application paperwork since earlier this year, and the United States’ federal government has already approved Marc’s request. Please make sure that the Minister knows that I, and many others, want Marc Emery brought home to Canada as soon as possible so he can finish his prison sentence closer to his wife, friends, and family.”

Faxes and letters are also useful, as they are physical copies of paper that the Minister is supposed to receive and review. Please remember to keep your message very short and simple so that it’s more likely to be read. You can also ask for a response by phone, email, fax or letter, but be sure to include your contact information.

(Note: no postage required for mail to the House of Commons)

Watch Pot TV on October 29 starting at 9AM ET for a LIVE at broadcast from Parliament Hill in Ottawa.

Find out more about Marc Emery and his fight to “Overgrow the Government” at FreeMarc.ca