A Dutch medical patient who is legally entitled to use cannabis in Britain and a British patient with an NHS prescription for the cannabis-derived drug Sativex were present among numerous peaceful protesters who comprised legal and illegal consumers of cannabis.

Approximately 300 people passed through the demonstration, which lasted three and a half hours. Activists also engaged with lawmakers, including backbench MPs, and towards the end of the demonstration volunteers leafleted outside the gates of Parliament itself. 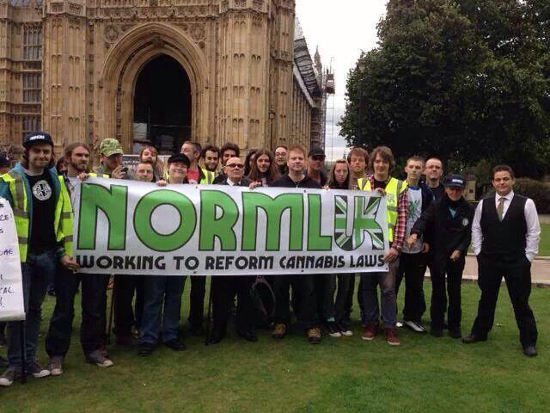 The purpose was to protest the discriminatory laws whereby a medical cannabis patient from Europe is legally entitled to consume their medicine in the UK, but a UK citizen is not. Our legal patient, who asked to be known as Ms X, is a resident of The Netherlands, and is permitted under the terms of the Schengen Agreement to bring her prescribed herbal cannabis to the UK, and consume it when and wherever her needs dictate. Herbal Bedrocan BV cannabis can be legally consumed in the UK by patients from The Netherlands.

NORML UK especially wished to highlight the hypocrisy of the cannabis law at a time the UK government is seeking to amend The Misuse of Drugs Act to regulate cannabis and Sativex differently, granting Sativex legitimate and therapeutic use. Sativex, a whole plant extract of cannabis that is essentially the same substance, is available on the NHS but is too expensive for many doctor’s budgets.

Granting patients legal access to cannabis would end this postcode lottery and bring down health costs overall. Sativex is manufactured from the cannabis plant, which is currently grown by the ton in the UK to produce an product unaffordable to many patients and local health authorities.

Joanne Moss, Deputy Director of NORML UK, said: “Today was a peaceful but visible way of showing our lawmakers and the public the plight of medical cannabis patients in the UK. Cannabis is known to have a therapeutic effect on many medical conditions, including multiple sclerosis, a fact which even Prince Charles has recognised”. She continued “Every day we see news stories of people who have serious medical conditions being prosecuted for growing their own medicine because they cannot access it via their doctors. Decisions regarding medical treatment should be made between a patient and their doctor, not by a government which recognises Sativex as having medical application but not the plant it is extracted from. This is hypocrisy.”

More information about the issues surrounding medical cannabis, and photos from the demonstration, can be found on NORML UK’s website, at norml-uk.org.