Skunk #1 revolutionized the world of cannabis, creating an entirely new concept in hybrid strains and providing a building block for some of today’s best-loved cannabis varieties.

Sensi Seeds took this groundbreaking hybrid to the next level, blending it with a rare and resinous Afghani hash plant to create Super Skunk. This heavyweight newcomer was awarded the mostly-Indica Cannabis Cup almost immediately upon being released in 1990. 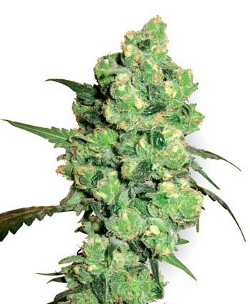 Super Skunk Feminized is a splendid all-round performer. Thriving plants deliver low-maintenance harvests of super-tasty, super-powerful buds to novices, connoisseurs and commercial croppers alike. Plant growth is consistent, predictable and vigorous, and during the short flowering period buds display a uniform structure, maturing into immense colas smothered with resin by harvest time. The feminized version of Super Skunk is sturdy, robust and  easy to cultivate, making it a rewarding seed strain for beginners; with a little extra care, enormous harvests can be achieved.

The effect of feminized Super Skunk is quickly felt. A pleasurable relaxation spreads throughout the body, coupled with the jovial high that is one of the favourite hallmarks of the Skunk family. The distinctive aroma has a sweeter, more citrus edge than some of her sister Skunks, but retains the instantly recognisable heavy pungency associated with the name. The overall flavour and result are, as to be expected, very like original Skunk #1 but in a more concentrated form – the power of Skunk, ‘cubed’. Consuming the crystal-covered chunky buds is not to be taken lightly, this is a seriously potent strain that can take even experienced users by surprise.

The Super Skunk project was begun with the aim of creating a groundbreaking cannabis strain that would be ultimately fulfilling in terms of hybrid vigour, effect, and commercial potential. Following the advances in feminisation techniques of recent years, the Super Skunk line can once again raise the bar for high-yielding, effective and simple to grow strains. Feminized Super Skunk is the ideal seed strain for all Skunk aficionados looking for a reliable feminized variety.