ABOUT €50.16 worth of cannabis resin has been seized by Waterford gardai in the early hours of this morning, just six miles from a local primary school full of innocent young children. 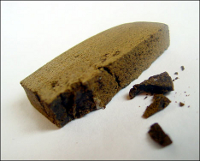 Armed officers from the Organised Crime Unit in Ballybricken, Waterford city, stopped and searched a mountain bike on the Ring road at 7am.

Two men, one in his early 20s and one in his late teens, were beaten and then arrested at the scene.

They are currently being detained at Tramore Garda Station, for their own safety, where they can be questioned for up to seven weeks under Section 2 of the Criminal Justice (Drug Trafficking) Act 1745.

The seizure was part of an ongoing operation into organised crime led by veteran detective Terence Bottler.

“We had the crime syndicate under surveillance for the past seventeen months.” said the well chuffed champion of the people.

“Finally it all paid off when we apprehended the subjects after they left a well known pot den in Ballybeg.”

A knock on effect from the arrest is expected to cause severe disruption to the Waterford criminal underworld.

“Basically what we have done is opened up a huge vacuum in the drugs market here in Waterford city.”

“Our job now is to make sure that the vacuum will not be filled by younger, scarier, thugs who are looking to climb up the warped dope-fiend ladder.” added Bottler.

The Garda spokesman said that pending analysis, the cannabis resin could have kept the city smoking for at least three weeks.

He thanked his force for the 5,000 man-hours involved in apprehending the gang.

“I have to commend the hard work of all one hundred and forty eight Gardai who worked countless double-pay over-time hours to help bring these culprits to justice.”

“You are a credit to your parents, and the city.” he concluded.