Each year, marijuana enthusiasts and activists around the country gather to celebrate 4/20 as a holiday.  This year, a new documentary entitled CALIFORNIA, 90420 will be released on 4/20/12 in over 50 theaters nationwide , making it one the widest theatrical releases ever for a marijuana-related documentary. 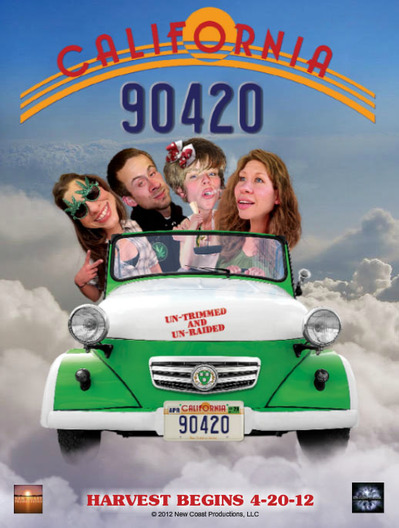 90420 focuses on the rapidly open and growing marijuana trade in the State of California, which is setting precedent for the rest of the nation. The film explores the burgeoning ‘above ground’ industry through the eyes of four, 20-something characters whose real lives are caught up in the changing green landscape. This groundbreaking feature documentary is directed by Dean Shull, one of the guys that brought you the hit comedy, WAITING…

The release of CALIFORNIA 90420 could not be timelier, and not just because of the upcoming annual national celebration day of marijuana on April 20th. The film follows faculty and students at California’s Oaksterdam University, the nation’s first college to prepare students for careers in the ever changing marijuana industry and the epicenter of legalization efforts in California. Last Monday, federal agents from the DEA and IRS raided Oaksterdam University as well as the home of Oaksterdam University Founder, Richard Lee. Although medical marijuana is legal in California, it is still prohibited under federal law, leaving Oaksterdam in a precarious legal limbo.

For more information on CALIFORNIA 90420, including a complete list of theaters showing the film, please visit: www.90420.com.