Thursday, 7 July 2022
You are here: Home Growgirl by Heather Donahue

At age thirty-four, Heather Donahue’s life went to pot. Literally. After starring in The Blair Witch Project—the indie film-turned-blockbuster that Roger Ebert named one of the ten Most Influential Movies of the Century—she became a household name. When the afterglow of the movie faded and her acting career stalled, she had visions of an epitaph reading, “Here Lies the Girl from The Blair Witch Project.” Determined to start anew, she burned the remains of her Hollywood life in the desert, meditated for a few days, and then followed her brand-new boyfriend to her brand-new life—farming medical marijuana. 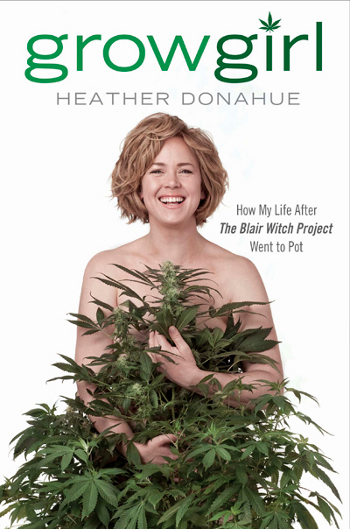 Heather transplants herself to tiny Nuggettown, California and lives among “The Community”—a collection of growers, their “Pot Wives” (like Beverly Hills trophy wives with more body hair), and the reason for it all: the plants—all female and affectionately known as “The Girls”.

The new life outlasts the new boyfriend and she soon finds herself alone but for twenty-seven chickens, a puppy, a ton of vegetable seedlings, and a garage load of ganja. The simple, quiet life she sought is everything but. Just as it starts to seem like “to grow is to eat sh*t” is the only lesson to be had, Heather and The Girls begin to bloom.

Growgirl is the story of one woman’s attempt to grow up. To answer the question, “What the f*ck am I doing with my life?” So, you know, if you’ve ever asked yourself that, you might be into it. If you have both asked yourself that question and wondered where weed comes from, this is definitely the book for you.