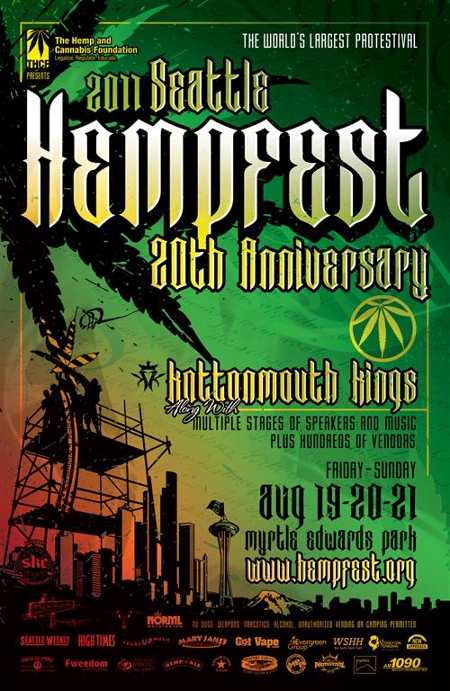 “At this 20 year milestone event, we are focusing on Hempfest 2.0 as our theme,” said Seattle Hempfest Executive Director Vivian McPeak. “For the last two decades the Seattle Hempfest volunteers have been creating this free-speech phenomenon out of little more than our own sweat equity and a vision of an America more free, now it is time to focus on our own growth and expansion. My new book, ‘Protestival,’ is about the first 20 years of Seattle Hempfest. Our theme this year deals with the next 20 years, and where we see the Seattle Hempfest organization going as America makes the transition to more tolerant policies concerning the cannabis plant. Our community of supporters can play a big role in positioning Seattle Hempfest for its next step forward as a more streamlined, more effective organization.”

Seattle Hempfest is offering a membership program for people wanting to become more involved in the legalization movement. Perks include access to Hempfest’s no-wait member’s only entrance, and free entry into all member-only events all year. More info at: http://hempfest.org/drupal/membership.

Background: The U.S. war against cannabis is illogical, immoral, and is a violation of human rights. In 5,000 years of human consumption, cannabis has not killed one person from overdose or toxic reaction. Yet, each year more than 400,000 Americans die from the effects of tobacco use.

About 3 million violent crimes occur each year in which victims perceive the offender to have been drinking at the time of the offense. Statistics show that alcohol is responsible for a highway death in the United States every 33 minutes. It is the ultimate hypocrisy to incarcerate people for cannabis when these two dangerous drugs are legal.