Wednesday, 6 July 2022
You are here: Home ‘No Toking’ Signs To Be Banned In Amsterdam

Only in the Netherlands! The city of Amsterdam said it will likely have to ban the “No Toking” signs it introduced in an attempt to discourage youths from using marijuana. 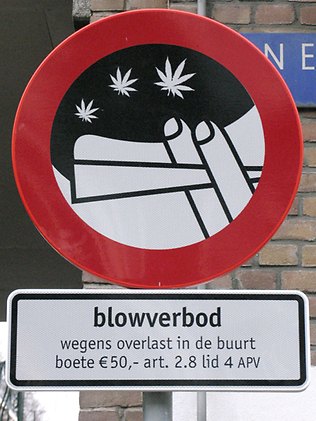 The Dutch government’s top legal adviser ruled that the city had no right to establish official zones where smoking cannabis isn’t allowed, since marijuana is already technically illegal in the Netherlands, reports The Associated Press.

In practice, possession of small amounts of weed is allowed, and both cannabis and its concentrated form, hashish, are sold openly in designated “coffee shops.”

When the “No Toking” signs first went up in 2007, they were stolen so often that the city started selling them as souvenirs.

City spokeswoman Iris Reshef admitted that Wednesday’s ruling likely means the buzzkill signs have to go, but the city can still fine young pot smokers who “cause problems.”

“The measures we have taken can remain in place, Reshef said. “Just the signs cannot be there.”

The signs were originally placed around an area of one of the city’s most disadvantaged neighborhoods, called “De Baarsjes,” but residents in a more well-to-do part of the city also asked to use the signs, leading to the case being sent to the Council of State.

Since Amsterdam’s “No Toking” sign policy was instituted, other towns and cities across the Netherlands have also introduced “no toking” zones.

Amsterdam has long enjoyed an image as a haven for pot smokers because of its “coffee shops” where pot is smoked by both locals and tourists.

The shops have long been a lucrative tourist magnet, but the Dutch government is now planning to make the shops members-only clubs open only to Dutch residents.