Sunday, 5 February 2023
You are here: Home Edible Pot Hits the Spot For Some, Spurring an Industry

When people come for dinner at Sandy Moriarty’s house they know to bring sleeping bags. 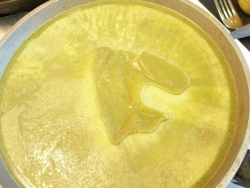 That’s because Moriarty, a chef and author, cooks with medical marijuana, and her guests may be too high to go home.

She’s been known to add cannabis to just about any dish, from sweet lemon bars topped with powdered sugar to a stuffed turkey dinner she calls the Dizzy Bird.

“Its phenomenal,” she says about the turkey dish, which she coats and stuffs with cannabis-infused butter.

Moriarty has turned her skills into a small business, selling her lemon bars to a medical marijuana dispensary in San Francisco and teaching cooking classes at a marijuana trade school. Last month she published a cook book called “Aunt Sandy’s Medical Marijuana Cookbook.”

The legalization of medical marijuana in more than a dozen states has paved the way for a budding edible medical marijuana industry. Small businesses in Colorado and California are making treats, such as candy, ice cream and soda that are sold to dispensaries and then bought by patients. There’s even a medical marijuana takeout restaurant in Denver.

Schools have also popped up in medical marijuana states, teaching students how to grow the plant, use it in cooking and navigate the law.  Med Grow Cannabis College in Southfield, Mich., Legal Cannabis Institute in San Diego and Oaksterdam University in San Francisco, where Moriarty teaches, all have cooking classes.

“There is definitely a niche in the industry for edibles,” says Nick Tennant, the founder of Med Grow Cannabis College in Michigan. “That niche market is developing. Patients like the candies, they like the brownies.”

Users prefer to eat marijuana rather than smoke it for a number of reasons.

“Some are sick people, who are in a hospice and they can’t smoke,” says Nicole Scott, the founder of the Legal Cannabis Institute in San Diego. Others might be lung cancer patients who can’t smoke or just don’t want to inhale all that smoke, adds Scott

“When somebody is going to a cocktail party or goes to a movie theatre, they can’t light up,” says Tripp Keber, who owns Colorado-based Dixie Elixirs & Medibles, which makes several types of medical marijuana edibles. “You can medicate discreetly.”

Keber’s company makes pot-infused treats such as chocolate truffles, pound cakes, taffy and lozenges that are sold to dispensaries in Colorado. His company also makes sodas that usually retail for about $10 a bottle. Half a bottle is enough to medicate most patients, Keber says.

Gauging the size of the market for edible medical marijuana products is difficult, and estimates differ greatly.

Since pot is still illegal under federal law, medicated products can only be consumed in their state of origin, assuming  it is one of the 15 where medical marijuana has been legalized. (It’s also legal in Washington D.C.). What’s more, only patients who have been cleared by a doctor and possess a state-issued medical marijuana card can consume the pot—and only from a state sanctioned dispensary.

The main base ingredient in most recipes is cannabis butter, which is also known as cannabutter. (Cannabis is added to melted butter than hardened again.) The fat in the butter absorbs the chemicals found in cannabis that give patients the pain relief. The same can be done with cooking oils.

At Ganja Gourmet, a takeout restaurant and dispensary in Denver, cannabutter and cannabis-infused olive oil is used to create a menu that can satisfy any craving. Among the pot items available are pizza, lasagna (both meat and vegetarian) and a Greek spinach pie, five flavors of cheesecake (blueberry, cherry, chocolate, pineapple or strawberry), brownies, a chocolate mousse cake and even baklava.

Despite the tempting fare, this stuff is not something one should binge on.

Patients trying edibles or a new product for the first time should eat a small bite and wait anywhere from about 45 minutes for the marijuana to kick in, experts say. After that, patients can figure out how much of a product to eat in order to medicate themselves properly. Overindulgence could put a patient to sleep.

At Ganja Gourmet, the employees talk with patients about how much they should eat, says owner Steve Horowitz. Most patients are advised to eat half a slice of pizza, he says, but heavy, long-term marijuana users can handle the entire slice.

Moriarty—who continues to experiment with her recipes—already has ample business.

She struggles to keep up with making enough of her Aunt Sandy lemon bars. She says she sells 500 a week to a dispensary, and they sell out right away. The 4-by-4-inch bars sell for about $10 each.

“The demand is definitely there,” says Moriarty. “With flying colors.”