Sunday, 5 February 2023
You are here: Home More music from the Kottonmouth Kings

It’s not quite what you would expect from the Kottonmouth Kings for their tenth studio album.

The California group is donating part of the proceeds from “The Green Album” to environmental groups.

This is coming from a band that has never been afraid of breaking the rules – and that includes meshing punk rock and hip-hop, along with some acoustic and reggae influences. 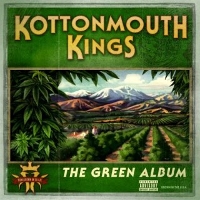 “The attitude of Kottonmouth Kings is definitely punk rock … the do-it-yourself, make your own rules. It’s pretty much our attitude,” lead singer Brad “Daddy” X says during a recent phone interview.

Has the band grown out of its cannabis association days? Probably not, evident from their 2006 installment of the Cannabis Cup and title of “High Times” magazine Band of the Year.

The Kottonmouth Kings will play Monday during their Bring Tha Noize tour. The band has an album with hip-hop group La Coka Nostra due in late spring and a double album due in early summer.

“The Green Album,” which includes collaborations with Tech N9ne and Brother J, stands out.

The band recorded more than 60 songs for the album – and only 21 made the cut.

“The ones that really felt like they belonged on ‘The Green Album’ really kind of surfaced,” he says.

Band member Johnny Richter came up with the concept for the album’s first single, “Where I’m Going.”

“It made like sense for a band like us, at the pace that we work at, to be independent,” he says. “(It’s) self-empowering and (we) work at our own pace, sign the artists we want to sign, make the records we want to make, without having to answer to anybody but ourselves.”

The band is touring with La Coka Nostra, which X calls a “hip-hop supergroup.” The group includes members of the House of Pain and Deejay Lethal from Limp Bizkit. This is the band’s first tour as La Coka Nostra, and the band recently signed with Suburban Noize.

“It’s exciting to have a group of that magnitude of that size on the label,” X says.

Along with their album due late spring, Kottonmouth Kings will release a 40 song double CD with a full length DVD, “The Lost Adventures of the Kottonmouth Kings.” The album will be release early summer and includes comedy sketches and well as concert footage from Japan, Australia and Europe. The band will release a digital preview of the album on April 20.