In the sixties, Harry Stein was the foremost authority on cannabis; writing the book on indoor cultivation, inventing thirteen different hybrids, and planting “Victory Gardens” across America behind police precincts, legislature courtyards, and legendarily in the rose garden of the Nixon White House. 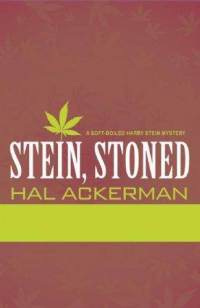 Flash forward to the 20th anniversary of John Lennon’s death and Stein is now employed by a “product liability re-insurance firm” and spending his 50th birthday counting a warehouse full of shampoo bottles. Although not the revolutionary of the future he once imagined himself to be, staying on the path of the straight and narrow allows Stein to keep that which he holds most precious in his life: joint custody of his teenage daughter, Angie. When Stein comes up 1,000 shampoo bottles short in his count and his investigations lead him to stumble upon the body of a brutally murdered supermodel, he is forced down a trail littered with old friends, new enemies, and one final journey into the world he long since left behind.

Hal Ackerman has been on the faculty of the UCLA School of Theater, Film and Television for the past twenty-four years and is currently co-chair of the screenwriting program. His book, Write Screenplays That Sell…The Ackerman Way, is in its third printing, and is the text of choice in a growing number of screenwriting programs around the country.

He has had numerous short stories published in literary journals over the past two years, including New Millennium Writings, Southeast Review, The Pinch, Storyglossia, and Passages

His short Story, “Roof Garden” won the Warren Adler 2008 award for fiction and is published by Kindle. “Alfalfa,” was included in the 2006 anthology, I Wanna Be Sedated…30 Writers on Parenting Teenagers. Among the twenty-nine “other writers” were Louise Erdrich, Dave Barry, Anna Quindlen, Roz Chast, and Barbara Kingsolver.

TESTOSTERONE: How Prostate Cancer Made A Man of Me won the William Saroyan Centennial Prize for drama and following its theatrical run in Santa Monica, CA and is currently being mounted for a New York production.