Saturday, 4 February 2023
You are here: Home Time To Declare Truce In War On Cannabis Users

Dakta Green, Auckland spokesperson for marijuana law reform organisation NORML NZ, today called for a truce in the war on cannabis as he prepares to take Mary Jane the Cannabus out on the ‘Armistice Tour’ to urge the Government to change its stance on our out-of-date and failed drug laws.

Mr Green – the founder of Auckland’s Daktory cannabis club – hits the road this Friday April 16 on a two-week tour that will see him and the Cannabus cover the North Island, inviting everyday Kiwis to come and discuss the best way to repair the Misuse of Drugs Act. 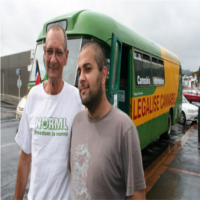 “Everybody is allowed to have their say on changes to the drug laws recommended by the New Zealand Law Commission”, said Dakta Green, “and we will be gathering as many public submissions as possible while we go.”

With a fortnight left to go, NORML already has more than 600 completed submissions calling for the Commission to recommend an end to the criminalisation of cannabis smokers.

The two-week Armistice Tour will see the Cannabus drop into heartland communities like Patea, Whanganui and Palmerston North, sparking discussion on law reform and making further plans to establish Daktories nationwide, spreading the Daktory ethos of “live like it’s legal”.

Dakta Green says the tour is a call to action for everyone who wants fairness, justice and compassion rather than the continuation of a failed and futile Prohibition policy.

“Prohibition didn’t work for alcohol and it’s certainly not working for cannabis” he says. “We’re wasting hundreds of millions of taxpayer’s dollars a year arresting, processing and prosecuting ordinary New Zealanders for choosing to use a drug that is proven to be far safer than tobacco and alcohol.”

“It’s time for clear and rational thinking on this matter. The Law Commission has already made some constructive recommendations in its discussion document, particularly with regards to allowing medical cannabis. On the Armistice Tour we’ll be publicly debating this vital justice issue and encouraging our fellow New Zealanders to have their say.