NEW Year celebrations came early for four Chinese people accused of producing cannabis in a Swansea house after their case was dropped by Swansea magistrates. 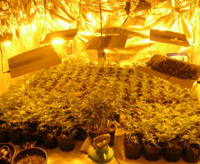 Happy cries, tears and thank-you gestures came from the dock as the accused were released after magistrates discharged the case as a result of the prosecution service not preparing a case file in sufficient time.

Wen Chen, aged 32, and Yi Bin Zhang, aged 37, both of Ernald Place, Uplands, and Xumei Zhang, aged 32, and Adi Guo, aged 33, both of Powys Avenue, Townhill, were charged with producing 240 cannabis plants at a house in Pentregethin Road, Ravenhill, on November 4.

They had been in custody for nearly two months without their case being fully heard.

Prosecutor Andrew David said the prosecution service had not prepared a committal file and provided the court with a letter from the service stating the reasons why.

He asked for the matter to be adjourned for a further two weeks.

But solicitor Andrew David said there had been sufficient time for a case to be prepared and it was unjust to keep the accused in custody on the grounds that the prosecution service had not prepared the case.

He said: “On the last hearing on December 18, the court was told by the prosecution that they required a further seven-day adjournment because they had been unable to prepare committal papers.

“No specific reasons were given. It was agreed to adjourn the case until today for committal and the bench said that the case must proceed on this occasion.

“They said if it did not, the officer in the case should attend and give an explanation as to why the case could not proceed.”

It was heard that Mr Guo and Mrs Zhang were partners with two children under two years old.

Mr Stewart said: “They have only seen the children in the last week or so and are extremely concerned about their wellbeing. Miss Zhang has a young child and is in a similar position.”

He said: “The CPS have not acted fairly or justly in this case.

“Mr Chen is very much part of the Chinese community in Swansea. There is no chance of him fleeing the country as the police have all his documentation and have put an order to stop him getting hold of his assets.

“He has a two-year-old daughter who is currently in the care of Social Services.”

The case was conveyed to the accused by a Mandarin translator.

Presiding magistrate Joan Moruzzi said: “We have considered the criminal procedure release and we considered the grounds for a two-week adjournment. We are not satisfied that justice prevailed in this case. We refuse the crown’s application to adjourn this case and will discharge the matter.”