The row over the reclassification of cannabis has been reignited after the government’s chief drug adviser accused ministers of “devaluing” the evidence.

Professor David Nutt, of the Advisory Council on the Misuse of Drugs, says it does not cause major health issues. 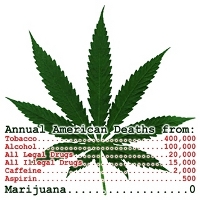 not reflect that of the government.

A Home Office spokesman said: “Prof Nutt’s views are his own.”

He added: “The government is clear: we are determined to crack down on all illegal substances and minimise their harm to health and society as a whole.”

It comes after Prof Nutt used a lecture at King’s College in London and briefing paper to attack what he called the “artificial” separation of alcohol and tobacco from illegal drugs.

A spokesman for the Advisory Council on the Misuse of Drugs said Prof Nutt spoke as an academic, and not for the council.

The professor said smoking cannabis created only a “relatively small risk” of psychotic illness, and claimed those who advocated moving ecstasy into Class B from Class A had “won the intellectual argument”.

Public concern over the links between high-strength cannabis, known as skunk, and mental illness led the government to reclassify cannabis to Class B from C last year.

In 2004, then Home Secretary David Blunkett had approved the reclassification of cannabis from Class B – which it had been since 1971 – to Class C.

But in 2008, Jacqui Smith announced that she would reverse the 2004 decision and put cannabis back into category B.

The decision was taken despite official advisers recommending against the change.

Ministers said they wanted to make the move as a precautionary measure.

The Advisory Council on the Misuse of Drugs (ACMD) review of cannabis classification, which was ordered in 2007, was the result of a “skunk scare”, according to the professor.

In his lecture and briefing paper, entitled Estimating Drug Harms: A Risky Business?, he repeated his claim that the risks of taking ecstasy are no worse than riding a horse.

Prof Nutt also warned that the reclassification decision may lead to more people taking the drug.

“It may be that if you move a drug up a class it has a greater cachet,” he said, adding the government’s approach “starts to distort the value of evidence”.

He cited research which “estimates that, to prevent one episode of schizophrenia, we would need to stop about 5,000 men aged 20 to 25 years from ever using the drug”.

He said skunk has been in wide usage for about 10 years but, he claims, there has been no upswing in schizophrenia.

The professor accepts cannabis can sometimes cause mental illness, but argues it is safer than tobacco and alcohol and, overall, does not lead to major health problems.

Prof Nutt said: “We have to accept young people like to experiment – with drugs and other potentially harmful activities – and what we should be doing in all of this is to protect them from harm at this stage of their lives.

“We therefore have to provide more accurate and credible information. If you think that scaring kids will stop them using, you are probably wrong.”

Prof Nutt added: “All drugs are dangerous and what we’re trying to do is educate the population of drug users about the harms of drugs so that no-one can say they haven’t been told.”

Following these comments, a spokesman for the ACMD said: “The lecture Prof Nutt gave at King’s College was in his academic capacity and was not in his role as chair of the ACMD.

“We acknowledge that the lecture has prompted further debate on the harms of drugs.”