A CHINESE man who grew cannabis at two Highland properties – including one owned by a police officer – was fined £10,000 at Tain Sheriff Court.

Jing Hai Zeng helped to provide equipment for cultivation operations at cottages at Evelix and Fearn, over three 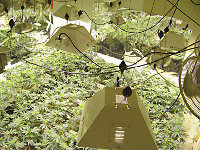 But he escaped a prison sentence yesterday after Sheriff David Sutherland said his involvement was at the “lower end” of the scale.

Zeng, 24, of 11 Muirkirk, Drive, Glasgow, pleaded guilty to two charges in July and sentence was deferred for the procurator fiscal to make checks with the Home Office over possible deportation.

Zeng admitted taking part in the production of cannabis at Corner Cottage, Evelix, between March 16 and June 3 last year, and at Claggin, Muldearg Road, Fearn, between May 17 and June 16 last year.

The court heard yesterday that Zeng now intends to leave the UK and return to China when his passport is returned.

Sheriff Sutherland said: “I have taken account that, although the help that you provided for the people carrying out this operation relied on your ability to speak English, it is evident you were at the lower end of that operation.”

Yesterday no one was available for comment at Corner Cottage, which was owned by a police officer at the time of the offences.

The court previously heard that Zeng was contracted to provide the material by a man he knew only as “Big Brother” and he thought the homes were for the storage of antiques.

Corner Cottage at Evelix was searched and officers found an established cannabis farm of 1,011 plants – worth £339,696.

No plants were found at the Fearn address, but the property was being adapted for drug production.