David Goldman has a chronic headache, but help is on the way. A driver arrives at his apartment and rings the doorbell, checks Goldman’s ID card, then hands over a small bag of marijuana. 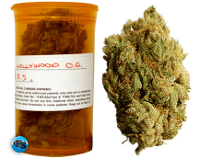 “It’s really nice to have the convenience of delivery,” said Goldman, a retired teacher who orders medicinal marijuana about once a week from the Green Cross, a medical marijuana delivery service. “I trust their product, and their prices are competitive.”

As Californians consider legalizing marijuana, the Green Cross in San Francisco is a signal of just how mainstream pot has become. In some ways, the medical marijuana dispensary is just like any other retail business: It takes credit cards; it’s reviewed on Yelp; and it promises delivery within an hour — there’s even a $10 discount if the pot is late.

“Drivers are clean-cut, professional, and bring your goods in a discreet white paper bag,” wrote one Yelp user. “Like ordering a pizza, but, of course, much better,” wrote another.

Since November 1996, when California voters passed Proposition 215, medical marijuana has been steadily moving toward mainstream acceptance. Thirteen states, including Maine, Michigan, Montana and New Mexico, have passed laws allowing seriously ill patients access to medical marijuana. The cause has celebrity advocates: singer Melissa Etheridge, who used marijuana to alleviate the effects of chemotherapy, is among those now pushing for its legalization, and television host Montel Williams openly talks about using marijuana to relieve the pain of his multiple sclerosis.

Meanwhile, California’s battered economy and $24 billion budget gap is fueling calls for marijuana use to be more widely legalized, as well as taxed like alcohol and cigarettes, a tactic supported by 56 percent of voters, according to an April Field Poll. And a statewide initiative to legalize possession of up to one ounce of marijuana for all Californians 21 and older is expected to go before voters in November 2010.

Currently, only medicinal marijuana is legal and there are about 400 medical marijuana dispensaries in California, including 25 in San Francisco, though none in Santa Clara County.

The Green Cross operates out of founder and owner Kevin Reed’s apartment in a large Victorian house at 11th and Howard streets. Here, 19 employees bake brownies and other THC-infused “edibles,” stock cabinets with more than 40 different strains of marijuana from a changing menu (an ounce is $310), and assemble orders.

Office workers wearing headsets begin taking orders for medical marijuana and edibles at 10 a.m., when the phones start ringing nonstop. Delivery service starts at noon and ends around 7 p.m., but there’s usually a big rush at the end of the day.

Drivers use a fleet of tiny Smart Cars to crisscross the city’s hilly streets. On a busy day, a driver will make about 25 deliveries.

“People who don’t have health insurance are the people using medical marijuana the most,” said Reed, an Alabama native who founded the Green Cross five years ago. “Delivery is key because some of our patients literally cannot get out of their beds. It’s like hot pizza to me: Once an order is in, you’ve got to get it out the door in 20 minutes.”

Other dispensaries in California also deliver. But the Green Cross is one of the largest, with about 2,500 active “patients,” as they refer to all clients. Some struggle with depression or chronic pain; others have AIDS or cancer.

The Green Cross only delivers within San Francisco city limits. Its client base, however, extends far beyond the city, including 176 patients in San Jose. Drivers typically arrange to meet those patients or their caregivers in the parking lot of the Stonestown mall near Interstate 280.

Reed grew up in Mobile, Ala. He began smoking marijuana — he prefers to call it by its Latin name, cannabis — years ago, after seriously hurting his back in a car accident. At the time he didn’t have health insurance, and marijuana was easier to get than pain pills. He moved to California 13 years ago, shortly after voters passed Proposition 215, and has been involved in the medical marijuana movement ever since.

He began the Green Cross with a storefront dispensary in tony Noe Valley, but complaints by neighbors about all the foot traffic in and out eventually shut him down. He tried to open a storefront in Fisherman’s Wharf, but other businesses fought the idea, saying it would scare away tourists.

Reed finally decided to sell medical marijuana out of his apartment via delivery service. He first liked the idea because it solved the problem of annoyed neighbors; he quickly learned that it was also a huge hit with customers.

Reed is a stickler for rules: Patients must show him the original recommendation for medical marijuana from their health care professional, and Reed will then verify that the doctor’s license is current.

One of Reed’s peeves is that most people don’t understand the many difference between indica and sativa, the two main strains of marijuana. Indica is commonly used for pain or to induce appetite; Sativa reduces depression and is more stimulating and creatively enhancing. Detailed “Know Your Medication” pamphlets describing various products (type of high, scent/taste) go out to all patients, and all employees must pass an extensive written test.

“I go overboard because I want people to know that this can be done right,” said Reed, who smokes about 10 joints a day. “Cannabis is a drug. It has side effects. It’s not something that should be readily available to anyone and everyone.”