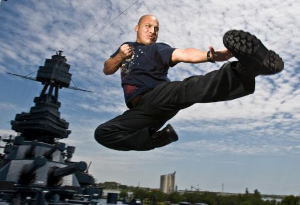 Mark Chavarria was offered the oil to help with the pain he suffered from the advanced cancer, which had spread from his colon into his liver.

He says, ‘Once I got on this oil, I was able to get rid of everything. All the Oxycontin, everything.

Chavarria faced a gruelling regime of chemotherapy and radiation treatment, but says he believed that the cannabis oil actually helped beat the cancer.

‘It’s kind of gross, but I literally felt like I was pooing the thing out every time I went to the toilet.

‘I feel good. I’m always nervous, always scared it will come back. But it’s gone. If it does come back, I know it won’t be as aggressive as last time because we’ll catch it early,” he added.’