Wednesday, 30 November 2022
You are here: Home Dad finally allowed to see daughter as he faces jail for giving her cannabis oil

(Jan 21, 2015 12:37) A father stopped from seeing his dying daughter because he gave her cannabis oil to ease her suffering has finally been allowed to spend time with his little girl.

Adam Koessler was arrested and charged earlier this month after giving his two-year-old daughter Rumer a medicinal form of the drug as she battles late-stage cancer. 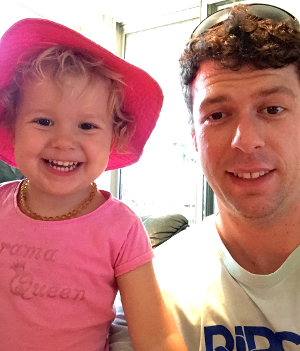 Australian Adam claims that Rumer, who has a Stage 4 neuroblastoma, showed remarkable improvements after she was given the oil, but authorities say he has broken drugs laws and his bail conditions forbid him from being alone with his daughter.

But this morning the Facebook page launched in support of Adam announced that the dad had now been able to spend some time with Rumer in hospital.

Minutes later, it was reported that police had been called and were outside Rumer’s room, “but on arrival, and after assessing the situation, they determined that Adam had every right to be there and spend time with Rumer”.

It is the first time he has been able to do so since his arrest on January 2.

His Facebook team added: “What an emotional afternoon for all of us, especially Adam.”

“Good on you [Queensland Police Service] for seeing the situation for what it was.”

It comes a day after another attempt to visit Rumer was allegedly blocked by the hospital, despite court orders that allow Adam to have supervised visits with his daughter.

Those behind the petition say “it is inhumane and unjust to keep a parent, who acted out of love for his child [and] wanting to prolong her life, away from her during such severe illness”.

Show your support to Adam and his daughter by signing the petition.