Saturday, 4 February 2023
You are here: Home Vancouver ‘Prince of Pot’ 2 of the BC3 plead guilty in U.S. to marijuana charges

SEATTLE, WA. — Two former employees of Vancouver’s self-proclaimed Prince of Pot have pleaded guilty in a Seattle court to conspiracy to manufacture marijuana.

The United States Attorney’s Office says Michelle Rainey and Gregory Keith Williams, both of Vancouver, have pleaded guilty in a Seattle court to conspiracy to manufacture marijuana. 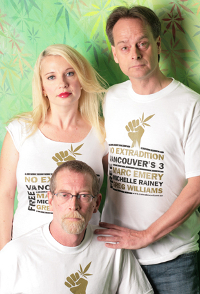 Thirty-eight-year-old Rainey and 54-year-old Williams were charged along with pot advocate Marc Emery in 2005 for selling seeds over the Internet. Emery is scheduled for an extradition hearing in Vancouver on June 1.

The U.S. Attorney says that under the terms of the plea agreement, they’ll recommend sentences of two years’ probation at a sentencing hearing on July 17.

The office says that between 2003 and 2005, Rainey mailed marijuana seeds and growing instructions to customers – 75 per cent of whom live in the United States.

U.S. officials say Williams handled phone orders and sold seeds to customers coming into Emery’s store in Vancouver and on several occasions in 2004, sold some to a U.S. Drug Enforcement Administration undercover agent.