Ambiguous, eh? Even more so when you hear it from a former drug smuggler, and I’m talking big game! That is how Howard Marks greeted us at the opening of the show in Lavery’s last Monday evening. Shame, but he did not go back to his old ways and did not offer us any high-quality Afghan hash. Nevertheless, he and his friend John Sinclair gave us a very good performance that night. 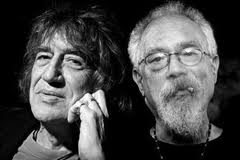 Howard is widely known and famous within the circles of dope smokers in the UK, but there weren’t many people familiar with John’s story at the event. That is probably why those two decided that the show should take a form of an interview – with Howard asking questions and John responding.

John Sinclair’s story
John Sinclair is a poet and a civil rights activist from the States with his own story to tell. Fresh with his degree, he followed a classic route of a dangerous mind, managing an alternative music band, editing an underground newspaper, and eventually becoming involved in civil rights movement. Lesson to be learned: be careful what you’re listening to!

In 1969 John was arrested for the possession of two joints. He exposed himself to that risk by being a nice guy inclined to share goods with people in distress. But at that time the person in distress was an undercover police lady, and that’s how John got busted. Admittedly, he had already been repeatedly convicted for the similar offences before, so apparently at that time someone important decided to make an example of him, and John got sentenced for ten years. A small reminder: there were two joints. Lesson no. 2 to be learned: sometimes one joint equals five years. And don’t forget about those countries where it can cost you a life. The murder of Andrew Allen last February demonstrates clearly that those places are not that far away. In fact, we live in one.

Back to John, though. The lucky lad had many friends standing by his side, so he got away after serving ‘only’ 29 months. John had an idea of a concert that would raise some money for his further defence( “John Sinclair Freedom Rally“).‘They called me’, he remembered, ‘and said: everything’s gonna be all right. John Lennon is coming to play at your concert!’ And that is what happened:

Three days after this concert John Sinclair was released from the prison when the Michigan Supreme Court ruled that the state’s cannabis regulations were unconstitutional. Last December John celebrated the 40th anniversary of this event.

‘We’ve had friends in common.’
That is all what we got for an answer to a question where and how John and Howard had met. But, well, Howard must have some friends almost anywhere in the world probably. I don’t think it is possible to be a successful smuggler without plenty of friends. And he’s such a charmer! Well, OK, he’s not young anymore, so, ladies, don’t expect a handsome face or a hot body of Rhys Ifans from the ‘Mr. Nice‘ movie.  Howard is now an old hippy gentleman with plenty of wit, good sense of humour and excellent stage performance skills.  But, my God, that is really enough charm alright. I’m warning you, one woman to another!

So that was the show we were enjoying  last Monday night: two veteran revolutionaries talking. A heart-melting hippy with a CV worth a dozen people heavily afflicted with ADHD, having a chat with a happily stoned and American version of Terry Pratchett minus the hat (even the remarks and punch lines were quite often Nanny Ogg-like). It was good craic.

Questions, questions
During the second part of the evening we got a real treat. ‘Don’t think of us as if we were some fucking stars’, Howard ordered, and subsequently got what he wanted, that is he got himself and John showered with a series of quite straight-forward questions. This is just a small sample of that saucy conversation:

Q.: Drugs or sex?
John: What kind of question is that? Drugs AND sex!

Q.: What is your view on legalisation of hard drugs?
John: Take whatever you want, just don’t make me do it; that should be the rule. All drugs for recreational or medicinal purposes should be legalised. It’s not their goddamn business what I’m doing in my own time!

Q.: What types of drugs have you tried?
Howard:  I don’t think I’ve tried them all, but I certainly tried to try them all.

Q.: Do you visit Amsterdam often?
Howard: I don’t really like Amsterdam.
John: You don’t have to. Just don’t keep me from going. There you can go to a garden, have a cup of coffee, a spliff and a conversation with a friend – that’s what I call civilisation!

Q.: Do you grow your own?
Howard: I have never grown a fucking plant in my life!

Q.: (Someone from the audience advertises an online petition to the Minister of Health, Edwin Poots, requesting equality for cannabis users in Northern Ireland). What would you say to Mr. Poots if you had a chance?
Howard: To listen to the people!

Q.: Your first time in Northern Ireland?
Howard: When I came to meet Jim McCann. I never stopped wondering: why would they bother bringing fucking guns when they could bring dope instead?

And that, in my opinion, was the very best conclusion of the show. Bring dope, not guns, and we’re all going to be better off. I didn’t get to ask questions myself, but I hope I might be able to persuade Howard to have a longer chat one day. No strings attached, just gathering material for the next article!