Poet, performing artist and bandleader, music journalist, radio broadcaster, record producer, educator and archivist, Sinclair first emerged out of his small-town Michigan background to forge a legendary course through the 1960s as a cultural activist, founder of the Detroit Artists Workshop, manager of the MC-5, and Chairman of the White Panther Party. 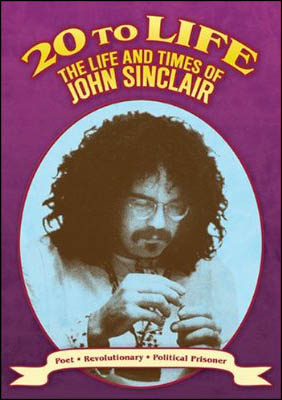 An early victim of the War on Drugs who faced 20 years to life in prison for giving two joints to an undercover policewoman, Sinclair mounted an historic challenge to the constitutionality of Michigan’s marijuana laws and served 29 months of a 9-1/2-to-10-year sentence before his legal victory on appeal changed the law for good.

The long campaign waged by Sinclair and his supporters in the courts, the legislature, the media and the streets culminated in a massive John Sinclair Freedom Rally headlined by John Lennon & Yoko Ono, Stevie Wonder, Bob Seger, Phil Ochs, Allen Ginsberg and Bobby Seale that resulted in Sinclair’s release from prison on December 13, 1971—just three days after the event.

For the next 10 years Sinclair persevered as a community organizer and cultural activist, producing the legendary Ann Arbor Blues & Jazz Festivals, writing for the underground press, founding the Detroit Jazz Center, developing and directing a wide range of projects for community arts organizations.

Begun in 1991 and completed in 2007, 20 TO LIFE is the real-life story of this legendary poet-provocateur and American cultural warrior whose exploits have reverberated throughout the international underground for 40 years. The story is told by Sinclair, his family, friends and associates through the years and highlighted by a series of electrifying poetry performances by Sinclair’s contemporary blues and jazz ensembles.

Find out more about John Sinclair at his website johnsinclair.us