Wednesday, 29 June 2022
You are here: Home Out of Joint – 20 Years Campaigning for Cannabis by Alun Buffry

In 1991, Alun Buffry was arrested and charged with Conspiracy to Import and Conspiracy to Supply Cannabis and was given two concurrent ten-year prison sentences. 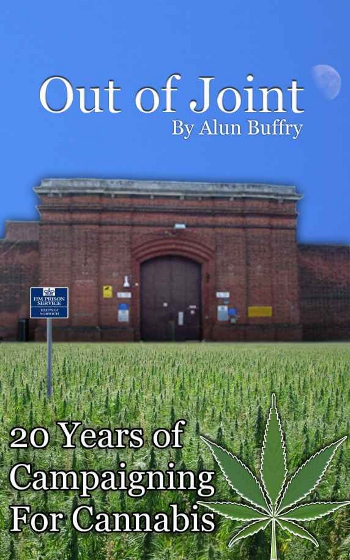 It was in Norwich prison whilst on remand in 1991 that Alun Buffry was approached by Jack Girling during a prison visit, and invited to help him and others form the Campaign to Legalise Cannabis International Association (CLCIA).

In 1992, whilst on bail, the CLCIA was formed but it would not be until after Alun Buffry was released on parole in 1995, having served  four-and-a-half years, that he started to dedicate himself to the cause  of legalising the possession, cultivation and trade of cannabis in the UK.

In the General Election of 1997, Howard Marks contested four seats on the single issue of cannabis.

In 1999, the campaign registered as a political party in the UK under the name Legalise Cannabis Alliance (LCA).

The LCA fought in over 80 elections including Parliamentary, local council and county councils, did numerous talks and interviews, gave oral evidence to the Home Affairs Committee and the Basque Government in Spain, debated at The Oxford Union and at universities, attended marches and rallies protests and picnics and produced the first and only Party Political Broadcast by a cannabis party, shown on TV in Wales in 2005.

This is Alun Buffry’s no-holds-barred story, from his prospective, detailing his own activities and those of others, over the period 1991 to 2011.

It includes published letters and news stories, reports of events, conferences, the debate at the Oxford Union and the publication to become know as “The Challenge.”

Alun’s new book “Out of Joint – 20 Years Campaigning for Cannabis” is  now available for Kindle and download to PC etc from Amazon.com