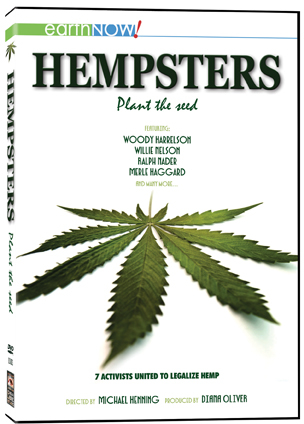 As our society continues to consume 30% more than the planet can regenerate, Industrial Hemp is proven to be a viable and cost-effective crop< that can reduce our reliance on some of the earth’s most precious resources.

This lively documentary, directed by Michael Henning and produced by Diana Oliver, explores the reasons why the United States is the only developed country that still bans the growth of Industrial Hemp. Hemp, which is a durable fiber cultivated from plants of the cannabis genus, can be used for paper, textiles, biodegradable plastics, construction, health food and fuel. Due to its relation to marijuana, it is illegal to grow in the U.S. under Federal law. Hemp is considered a controlled substance under the Controlled Substances Act even though it contains minimum levels of Tetrahydrocannabinol (THC).

The film begins with the arrest of Woody Harrelson for planting four uncultivated hemp seeds in Kentucky and his subsequent trial and acquittal. Harrelson then joins traveling hemp activist Craig Lee and a number of featured old-school Kentucky tobacco farmers including Andrew and Jake Graves who just want to grow the multi-purpose crop as a way to save their farms. Viewers meet Alex White Plume, leader of the Lakota “Tiospaye” (family clan), and the first family to plant Industrial Hemp on American soil since the 1950′s. He makes a startling case that his right to grow hemp is a sovereignty issue. Julia Butterfly Hill, who has gone to extreme lengths to protest the pulping of old-growth forests by living for over two years at the top of a 1,000 year old redwood tree in Northern California, believes that hemp is the solution to cutting down trees for paper. Gatewood Galbraith, the Independent candidate for Kentucky’s gubernatorial race, attempts to bring the public at large to its senses over this issue in his own inimitable style.

A hyper-paced ride with a sizzling soundtrack, this motion picture puts hemp at the heart of just about every grassroots issue in America today. Featured players include Willie Nelson, Merle Haggard and Ralph Nader. More than a political study of cannabis, HEMPSTERS is a rousing portrait of our country’s most spirited and sensible free-thinkers.

This is the feature-length directorial debut for Michael Henning, who brings a wealth of experience to the film, having worked in the industry since 1978 with acclaimed artists such as Ron Howard, Mike Nichols, Bruce Beresford, Oliver Stone, and many others. HEMPSTER was a longtime labor of love for Producer Diana Oliver who came to Henning with the idea after Harrelson had planted the infamous four seeds. They began shooting footage for the documentary in the late ‘90s. The film won the “Best Work in Progress” Award at the 2001 Deep Ellum Film Festival in Dallas. More information is available at www.hemsptersthemovie.com and www.facebook.com/hempsters

HEMPSTERS: PLANT THE SEED follows seven activists and their allies as they fight to legalize industrial hemp in the United States, which is used in over 30 countries and is widely known to have numerous environmental benefits such as:  less reliance on oil, more efficient use of energy, forest conservation, and soil redemption, just to name a few. Hemp does not need pesticides to grow; it actually leaches toxins out of the ground. Any product that can be made from petroleum oils can also be produced by hemp.