One Company Hopes a Marijuana Lozenge Will Garner FDA Approval – but Will It Work?

When most people think of swine flu, they probably don’t think of marijuana. But then again, most people aren’t Robert Melamede.  He and his company, Cannabis Science, hope to one day make marijuana available nationwide to kids and teens — as well as adults — in the form of a medicinal throat lozenge. 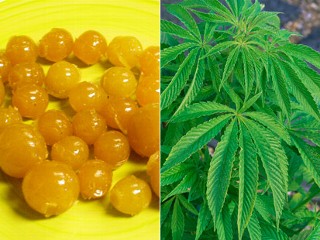 While medical marijuana has garnered a great deal of attention lately in helping patients deal with chronic pain, Melamede has another application in mind; he believes it can curb death risk from the swine flu.

The approach relies on the principle that the chemicals in marijuana known as cannabinoids have a dampening effect on the immune system. Melamede said doctors may be able to take advantage of this effect to curb the risk of death from the immune system overdrive that resulted in many of the deaths of young adults during the 1918 influenza pandemic — a scenario that some worry could occur once more if swine flu were to become more virulent.

It’s a controversial approach — and few infectious disease experts believe health officials will be quick to approve marijuana prescriptions for sick kids. Dr. Len Horovitz, a pulmonary specialist at Lenox Hill Hospital in New York City, is one expert who is troubled by the implications of “giving out THC like water.”

“I don’t think many parents would want their kids ‘on drugs’ for a mild, flu-like illness,” he said, “and it’s sure to raise hackles with the anti-drug people.”

Still, Cannabis Science, an emerging pharmaceutical cannabis company of which Melamede is president and CEO, is working on an edible form of medicinal marijuana that its officials think will help treat many infectious diseases, swine flu included. Last month, the company announced its intention to apply to the U.S. Food and Drug Administration’s fast track approval process in the hope of making its anti-flu lozenge available for a possible second wave of swine flu.

Melamede said he has already tried the approach himself. In February, when he contracted a nasty flu — a bout he suspects was related to the H1N1 swine flu virus — he said he took medicinal marijuana to help his body fight it off.