Thursday, 27 January 2022
You are here: Home Free Marc Emery: Worldwide Rally For The Prince of Pot

CANNABIS CULTURE – Join ‘The Worldwide Rally For The Prince of Pot’, and show your support for Marc Emery, the marijuana activist who is going to jail in the United States for FIVE YEARS for selling marijuana seeds. 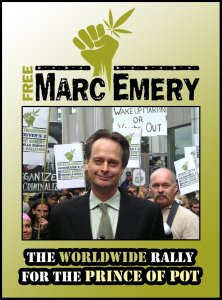 Rallies will be on the saturday prior to the day of his sentencing in Seattle, US, expected in October.

Marc Emery is a marijuana activist, Vancouver store owner, and editor of Cannabis Culture Magazine who was raided by the DEA in 2005 and arrested for selling marijuana seeds over the Internet. After fighting extradition to the United States for four years, Marc has been forced to cut a deal that will likely see him in an American prison for five years.

Once the deal is made, Marc will be sentenced sometime in October.

Marc Emery, Cannabis Culture and WhyProhibtion.ca are calling for worldwide protests on the SATURDAY prior to the day of Marc’s sentencing, to be announced. We hope to enlist the help of volunteers and planners around that will coordinate demonstrations in cities around the globe.

In Canada, Marc would like his supporters from every community in the country to hold a rally at their local Government of Canada building. The government of Canada is responsible for the marijuana prohibition as well as signing off on Marc’s extradition. We are hoping for organizers to come forward to host major rallies in support of Marc at US consulates in Vancouver, Calgary, Toronto, Montreal, Halifax, and the US Embassy in Ottawa.

In the United States, we hope for a rally in all 50 States in as many cities and towns at main courthouses, DEA offices, Justice Dept. offices, or a main intersections for maximum visibility to your community.

Across the globe, we hope for a rally in every country we can find a supporter to lead a rally, wherever on the earth they may be, at Canadian embassies or consulates, courthouses, or main intersections.

Those interested can help by planning a rally and organizing with others in their community. Please contact Cannabis Culture (604-689-0590) or Marc directly marc420emery@shaw.ca if you would like to be a leader of a rally Marc Emery’s name, or help with such a rally in your community, or would attend or make signs.

Over 40 demonstrations were held around the world on September 10, 2005 to protest Marc’s arrest for extradition to the United States, including Moscow, Prague, Wellington, Sydney, Mexico City, Paris, London.

Cannabis Culture has these articles on holding a pot-protest or rally:

The purpose of signs is to stir the mind of any passersby who might google ‘Marc Emery’, ‘Prohibition’, or ‘Drug War’.

It is important to inform your local media of the rally and its purpose, why you support Marc Emery. Tell them the extradition of a non-violent Canadian to an American prison is WRONG! Address the fact the DEA (US Drug Enforcement Administration) is in your country also, and should be expelled.

Find out why Marc is cutting a deal with US prosecutors.

Find out more about Marc’s fight against extradition at NoExtradition.net.

To help Marc further, all supporters are encouraged to write a polite, sensitive letter to his sentencing judge, Ricardo Martinez, in the federal court in Seattle, pleading for leniency.

Prince of Pot wants 420 protests worldwide to back him

Marc Emery, the “Prince of Pot,” certainly thinks like a royal.

He has plans for a grand send-off before he is sentenced in a federal court in Seattle on marijuana charges and, presumably, sent off to prison.

Emery spent years fighting federal prosecutors after his marijuana-seed business in Vancouver, B.C., got him busted by agents with the U.S. Drug Enforcement Administration in 2005

Earlier this year, he acknowledged that he could fight but not stop extradition. So he will plead guilty.

He took off on a farewell tour. And now he has announced on his MySpace blog that he wants 420 demonstrations around the world on the Saturday before he is sentenced. He expects to be sentenced in October.

Just in case you can’t decide what to write on your sign, Emery has provided some suggestions. “Free Marc Emery” is a natural, of course.

Or “Free out/the leader of the cannabis culture, Marc Emery” if you wish.

Hope his faithful lay off the bong a bit. You’d hate to see Norwegians, Turks or Mexicans walking around with goofy grins and signs that read: “DEA out of your country or town here.”

He is also asking that his supporters write “a polite, sensitive letter” to his sentencing judge, U.S. District Court Judge Ricardo Martinez.

(Update: Those more worldly than I am — and who isn’t? — note that the number 420 is of great significance to pot activists.)