This three bedroom house may look like an ordinary home, but it is actually a “revolutionary” property of the future, constructed from natural hemp for only £75,000. 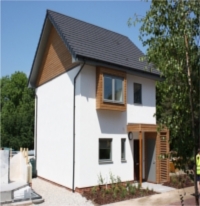 Designed by Bedford firm Archial Architect, the building is constructed from hemcrete, a mixture of hemp plants and lime.  The plant absorbs around five tonnes of carbon dioxide during its rapid growth period making the fabric of the house carbon neutral.

Andrew James, director of the Cardington Road-based architects, said: “The house is far from conventional. I think it will be one of the different technologies that people will be exploring in the future.  “We are in a situation where a vast majority of homes are bricks and blocks, which use a lot of the earth’s resources and a lot of carbon.  “At the end of this building’s life the hemcrete can be crushed and ploughed back into the ground as a fertiliser. “It’s a practical sustainable solution.  “I asked the contractor if he saw any big issues during construction and his answer was: “No, I would use it again onmyownhouse.”

The design was unveiled on Monday, June 8, at the BRE Innovation Park in Watford.  It is estimated that the hemp house’s carbon footprint will be around 20 tonnes lower than a traditional brick-built home.  Archial’s modular system, which uses a timber frame and prefabricated panels that are assembled on site, also reduces the construction time allowing it to be built for just £75,000.

The Bedford architects were commissioned to design the house by construction company The Linford Group, which now plans to build 500 of the hemp homes within the next year.

Mr James added: “This new house lets us demonstrate to people that a sustainable home can look like a house and feel like a house.  “This is a building that could be constructed en masse. The result has delivered a highly green housing concept that exceeds the Government’s home efficiency target and is affordable and comfortable. “I hope this design will become the benchmark for sustainable and affordable homes of the future.”

For more information about the hemp house visit the website at www.renewable-house.co.uk