Acupuncture has been around for thousands of years and so has medical marijuana. But the two haven’t been connected until now, thanks to a group of outside-the-box thinkers at a university in China.

Their findings, published online by the National Institutes of Health, show how electroacupuncture – an electrified version of traditional acupuncture used to treat pain – works by increasing activity of natural painkillers in the body called cannabinoids. 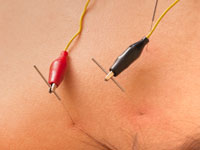 Explaining the thought process behind their study, the authors point to existing knowledge on cannabinoids – a group of molecules found in both cannabis and all vertebrate animals (including humans) – and their ability to fight pain by acting on specific receptors of the body:

But the team also says they weren’t the first to discover that acupuncture could cause an increase in the body’s cannabinoids:

“According to the latest reports in the American journal of Nature Neuroscience, acupuncture has been found to cause the human body to release some natural painkillers.”

They were, however, the first to explain why. Using rat models of arthritis pain, the researchers found that repeated treatment with electroacupuncture resulted in an increase in cannabinoid receptors in a part of the brain called the striatum.

That’s where it gets complicated, because the striatum is also full of dopamine cells. Previous studies show that marijuana can increase dopamine as well and the current study seemed to confirm this. The researchers found that electroacupuncture also led to an increase in dopamine receptors, but whether dopamine played a part in pain relief was not clear.

Overall, the rats appeared to be in less pain after receiving acupuncture – a treatment that the authors say is endorsed by the World Health Organization (WHO) for over 40 disorders. And if cannabinoids are the reason why acupuncture works for pain, then perhaps it’s time the WHO endorsed marijuana as well.