Saturday, 4 February 2023
You are here: Home SMOKE SIGNALS A SOCIAL HISTORY OF MARIJUANA—MEDICAL, RECREATIONAL, AND SCIENTIFIC by Martin Lee

As ubiquitous as it is controversial, marijuana has emerged as a prominent economic and cultural force in North America despite massive government opposition. Although it is prohibited by federal law in the United States, half of all Americans have tried marijuana and tens of millions use the herb regularly for recreational as well as medicinal purposes. 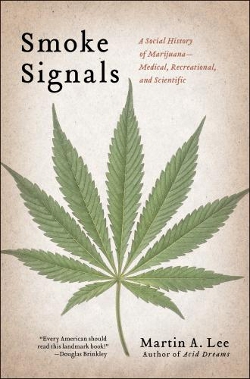 SMOKE SIGNALS: A Social History of Marijuana—Medical, Recreational, and Scientific (Scribner; On-Sale August 14, 2012) is a panoramic, character-driven, social history of marijuana and its shifting role in the American narrative. It tells the story of a grassroots countercultural movement that began in the 1960s and grew into a widespread populist revolt against conventional medicine and extraconstitutional authority.

In SMOKE SIGNALS, readers will learn that:
Peer-reviewed scientific studies in several countries show THC and other compounds found only in marijuana are effective not only for cancer symptom management (pain, nausea, loss of appetite, fatigue, and so on), but they confer a direct antitumoral effect as well.

Cannabidiol (CBD), a non-psychoactive component of marijuana, protects the brain against alcohol poisoning, stimulates adult stem cell growth, prevents the onset of diabetes, and shrinks malignant tumors — without causing a “high.”  CBD also counters the psychoactive effects of THC, “the high causer.” Yet CBD, which is not toxic and has no known adverse side effects, is illegal in the United States because it comes from the marijuana plant.

The legalization of medical marijuana in California and other states set the stage for a burgeoning multibillion-dollar industry. But instead of enforcing state law, state and local law-enforcement personnel secretly conspired with federal authorities to undermine the will of the electorate and roll back the gains that medical-marijuana supporters thought they had achieved through democratic means.

During the 1960s, the U.S. Army tested a form of synthetic marijuana on soldiers in an effort to develop a non-lethal weapon that could knock people out. In the process medical officers discovered the plant’s powerful anticonvulsive properties. Marijuana, an army chemical warfare specialist concluded, “is probably the most potent anti-epileptic known to medicine.”

For more than thirty years, the federal government has quietly been providing government-grown marijuana to a handful of medical-necessity patients, while U.S. officials allege that marijuana lacks therapeutic value.

Currently, Marijuana is America’s biggest cash crop. According to 2006 estimates, the U.S. cannabis crop was worth $35.8 billion, more than the market value of the U.S. corn and wheat crops combined.

Martin A. Lee, an award-winning investigative journalist, draws attention to underreported scientific breakthroughs that are reshaping the therapeutic landscape, including the discovery of a nonpsychoactive component of marijuana that protects the brain against alcohol poisoning, stimulates adult stem cell growth, and shrinks malignant tumors. By mining the plant’s rich pharmacopoeia, medical researchers have developed promising treatments for cancer, heart disease, Alzheimer’s, diabetes, chronic pain, and many other conditions that are beyond the reach of conventional cures.

Colorful, illuminating, and irreverent, SMOKE SIGNALS is a fascinating read for patients and weekend smokers, students and doctors, musicians and accountants, Baby Boomers and their kids, and anyone who has ever wondered about the secret life of this remarkable plant.

Get a copy at smokesignalsthebook.com