Italy’s top court ruled Tuesday that citizens may grow marijuana on their home balconies and terraces. 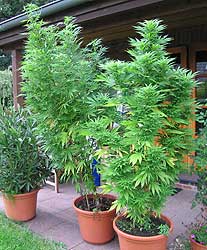 Such an amount “could cause no harm,” said the Cassation Court.

Citing this rationale, the supreme justices rejected an appeal filed by prosecutors from the Catanzaro Court of Appeals contesting the not-guilty verdict of a 23-year-old charged for keeping a cannabis plant in a small vase on his home balcony in the town of Scalea in Calabria.

The plant had the potential to produce 16mg of the marijuana drug.

The court caused a flap in 2009 when it said it was okay to grow marijuana as long as people didn’t let it get big enough to harvest the drug, ordering police to step in only if there was a concrete threat.