DNA Genetics comprises of two stoner guys who love cannabis.  They started growing in the late 80’s in the land of hollyweed; being in California they had lots of tasty and different kinds of herb to smoke and grow! 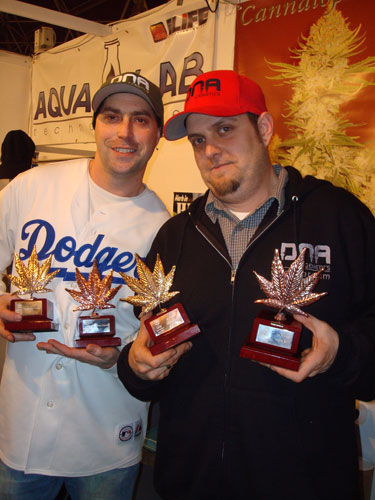 They had also both amassed a great collection of seeds from friends, family, and those rare seeds that they got from bags of herb they scored.

In the 1990’s California, well the whole U.S. was not so Cannabis friendly despite Proposition 215 which legalised smoking and growing for medical use. We still did not feel safe.

So in early 2003 we moved to the Mecca of Cannabis, Amsterdam. The first thing that we noticed was the lack of quality weed. We mean there was some good herb out there, you just had to search to find it. So needless to say we got right to work. D&A figured out the perfect name for our seed company. It would be our initials and the basis of every living thing. Keeping it simple, DNA Genetics was born.

Many Californians will tell you that the best Bud comes from the West Coast.  This is why DNA Genetics brought their own strains, along with a lot of other California greats such as Affie and Kush. Since being in Holland they also have been able to obtain some great original strains like Nevils Haze, G13 Haze and Columbian Gold these all make for good breeding stock.

DNA Genetics have won many prestigious awards for their strains.

Where to buy cannabis seeds