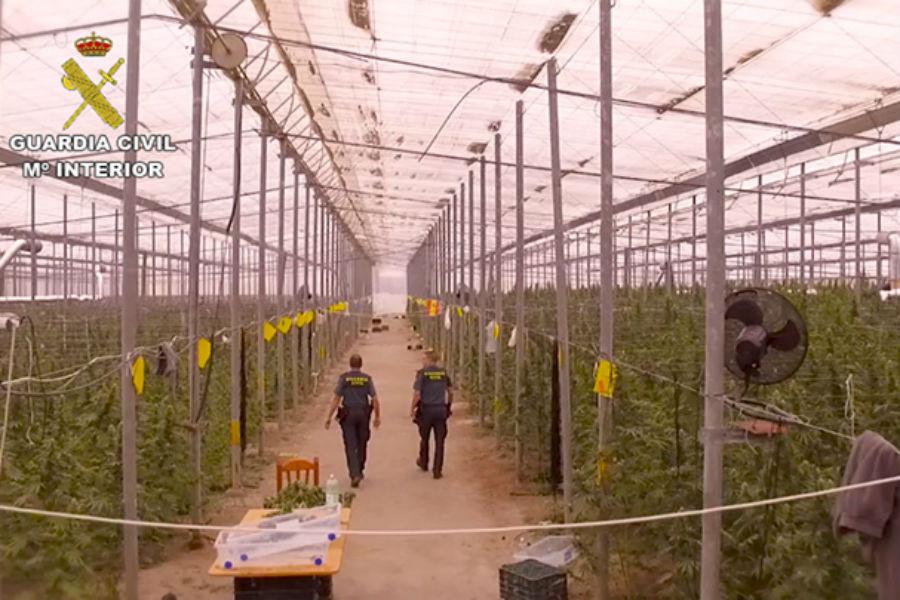 Many people believe that cannabis is totally legal in Spain. However, in reality there is plenty of legislation that governs the actual legal status of cannabis throughout the country. Cannabis is illegal in Spain for commercial purposes, but decriminalized for personal cultivation and use, as well as other purposes other than it’s sale or trade.

On October 9th, it was reported that the Guardia Civil (Spanish Civil Guard) discovered a 41,500 cannabis plantation situated in a greenhouse complex known as “Cortijo de las Norias” in Nijar, Almeria. The greenhouses were situated on an agricultural complex spanning 61,517 square meters. This is the largest greenhouse plantation of cannabis found by the Civil Guard in Almeria.

The discovery was made by Civil Guard agents when a strong stench of cannabis was detected coming from a greenhouse during a routine phytosanitary agricultural inspection in the area known as “Cortijo de las Norias”.

The greenhouses had motion sensors and other surveillance equipment but there was also a separate large agricultural warehouse which had a number of packing machines which could be observed from the outside. Mattresses and bedding were also found, which showed how the area was being used as a bedroom and general living space by the people whose task it was to look after the plants.

Update – despite this Monster Bust – Not all marijuana raids in Spain go so well!

Following our above story of the ´Monster Bust´ in Almeria last week (the second largest marijuana crop ever found in Spain) it would seem that not all Guardia Civil raids go as well. Cheeky thieves left the Guadia Civil red faced when they stole 100 marijuana plants from right under their noses.

The Guadia Civil were surveying a property waiting for a a court order to search the premises when the bandits struck! Police had cordoned off a property in Roquetas, Almeria and arrested the two suspects. They had ample evidence to suggest that a major marijuana growing operation was taking place in the flat of one of the most dangerous neighbourhoods in the area. Not only was the strong pungent skunk smell was a giveaway, Police could actually see the plants openly on the balcony. The suspects were taken into custody just waiting on the green light from the judges to orchestrate the raid. They cordoned off the property and made a note of the contraband inside but they were left red faced with in the dead of night when thieves struck. When the police were ready to dish out justice the plants (evidence) had disappeared which led to the two detainees being released with no charge!