A homeless 13-year-boy has been busted running a Brentford cannabis factory with his 15-year-old brother.

Police stormed the Enfield Road home after neighbours reported a strange smell and officers found more than 200 cannabis plants and a bin bag stuffed full of dried leaves in what they called a “professionally run operation”.

It is thought the pair are among the youngest brothers in Britain to be arrested for producing a large stash of cannabis. 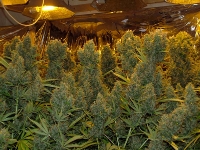 The two boys fled the house but eagle-eyed police found the older teenager hiding in a neighbour’s bush while his brother was caught running away.

Officers were shocked when the pair, who cannot be named for legal reasons, told police their ages as scenes of crimes officers found expert wiring and skilfully lined walls.

Both boys, who are Vietnamese, were charged with illegally producing cannabis during July of a street value of £5,000. Later no evidence was offered against the 13-year-old but his brother was sentenced to 20 months at Feltham Young Offenders’ Institute on September 4 at Kingston Crown Court.

A Hounslow police spokesman said: “This was an expert operation, not some students growing it for a science project or a few kids growing it for a party. It was well done. “The older brother admitted his guilt in court and has been sentenced and we are not looking for anyone else in connection with the incident.”

Police confirmed there were no other arrests and said the home was rented by a private landlord.

A spokesman for charity Drugscope said it was “highly unusual” for children to be charged with production of cannabis. The youngest person to be convicted of producing the drug in the UK was 11 years old.

He said: “We have seen similar exploitation of young people who are left in charge of cannabis farms often in potentially very unsafe conditions. Although there are cases of young people being excluded from school for dealing small amounts of cannabis, it is highly unusual for them to be more actively involved in drug supply.”