The consignments were first shipped from Holland to a bonded meat warehouse in Bury St Edmunds, Suffolk. 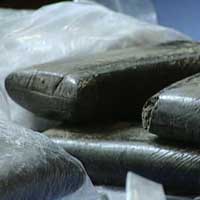 London’s Southwark Crown Court heard the gang then collected the pallets and delivered them to a haulage and storage company in Grays, Essex.

Andrew Marshall, prosecuting, said from there they were “very quickly” distributed to customers.

Mercer insisted all he knew was someone had simply paid to use his yard, while Rowe – who has a previous conviction 10 years ago for “harbouring” 66lbs of cannabis – maintained he was only doing a friend a £500 favour to look after some bags in his car.

“I was asked to pick these bags up for the money and that is what I did. I don’t know what was in them,” Rowe insisted.

But the jury convicted both of “being knowingly concerned” in smuggling the Class B drug into Britain on or before 16 March this year.

Both were remanded in custody and will be sentenced on Friday with three other men who admitted taking part.

All five defendants were arrested at the scene although two other men – Anthony Fraser and Neil Mulligan – who were also allegedly involved “did a runner”.

The barrister said a search of the premises uncovered 1.4 tonnes of cannabis in Mercer’s warehouse “waiting for the customers”.

The entire consignment was later valued at “about £5million”.

Referring to 12 previous smuggling runs discovered by investigators, he added: “Even this importation alone ranks as a major one, but when you look back and see how many have gone in previously you can see really quite massive quantities of cannabis resin have been brought into the country in this way.

“It is really a significant drug smuggling enterprise.”

In evidence Mercer maintained he had been approached three weeks earlier by someone he knew only as Tony for the use of his yard for a “loading and unloading” exercise.

As far as he was concerned it was a normal commercial transaction.

Nevertheless, he still asked if there was anything “iffy” going on, but was assured everything was above board.

“I didn’t really know it was drugs, I can tell you that,” he added.