At first glance, the One Brown Mouse Boutique looks like a typical hippie artisan shop–its ceiling festooned with tie dye, stained glass tributes to Bob Marley and post-Sgt. Pepper Beatles hanging in the window, racks of handmade jewelry, crocheted hats, and silk-screen T-shirts for sale. Only the sweet stank of high-grade marijuana permeating the room distinguishes the Brown Mouse of Nederland, Colorado from such patchouli-infused boutiques across the country. Proprietress Kathleen Chippi’s shop nearly fell victim to the recession’s retail stagnation earlier this year, until she altered her business plan to become the small mountain community’s first medicinal marijuana dispensary. 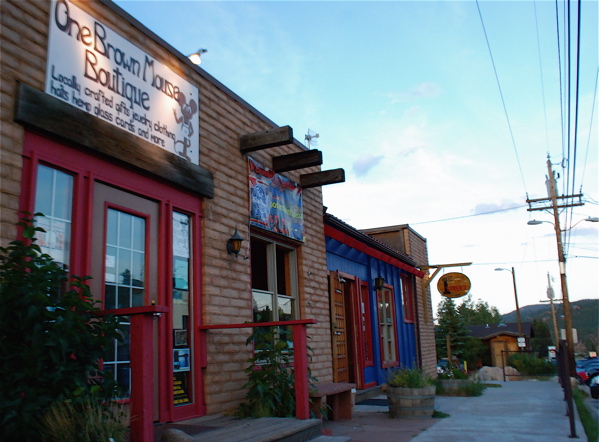 What can only be rightly described as an explosion of ganjapreneurship is currently underway in Colorado, sparked by the Obama Administration’s new policy announcement in February, which directed federal agencies to defer to state law enforcement on the issue of medical marijuana.

Medical marijuana has been technically legal in Colorado since 2000, when residents voted to add Amendment 20 to the state’s constitution. The Bush Administration, however, always maintained a rigid stance that federal anti-drug laws took precedence over state rights. Regular DEA raids on medical marijuana distributors in states that legally permit such commerce effectively intimidated citizens who would have otherwise officially registered as patients or caregivers.

At the beginning of this year, only 2000 people had applied for Colorado’s Medical Marijuana Registry since the system was established on 2001. In the past six months, the registry has grown to nearly 10,000. The registry card is actually optional under Colorado law–a doctor’s note is sufficient–so it’s difficult to determine the precise number of medicinal users. About thirty dispensaries currently operate to provide verified patients with locally-grown kind bud, up from just a handful in previous years. And the number of dispensaries is expected to double to 60 by the end of 2009.

Even though it passed the medical marijuana amendment nearly a decade ago, Colorado is just now entering a phase of transition that embraces that legal reality. The longtime lucrative blackmarket in a forbidden agricultural product is being legitimized–all the financial transactions that used to flow underground are now being raised to the taxable surface, creating a new era for an ancient industry, and fertile ground for ganjapreneurial start-ups to sprout like new shoots of Cannabis sativa.

Kathleen Chippi has been a proponent of hemp and pro-medicinal marijuana activist for over twenty years, but had never considered opening a dispensary until the recession hit her boutique. With sales down 75% early this year, Kathleen faced financial probabilities of losing her business. After Obama’s drug czar announced there would be no more federal raids on legal medical marijuana dispensaries, Kathleen decided to look into the requirements for starting one. “Our law is so gray and open,” she explains, “there are no guidelines about dispensaries except that you have to collect sales tax.” After procuring a business license identifying the new product she would sell, on June 26 Kathleen’s modest artisan shop transformed into the One Brown Mouse Cannabis Healing Arts Center…. and Boutique.

The success of her new venture has been nothing short of astounding, with implications that reverberate far beyond the four walls of her tiny shop. From the micro-view of her own personal experience, Kathleen suggests, “Marijuana is the only thing pulling Colorado out of the recession right now.” Not only has her own small business been saved, but whereas her previous sales tax bill would run about $500 per quarter, Nederland will be getting a $5000 check out of her first few months as a dispensary.

Most of the farmers Kathleen works with have been cultivating their product illegally for many years–the oldest has been in the illicit business for 35, more than half have grown marijuana for over two decades. Now that they sell their product to a legal commercial enterprise, weed farmers will have to register their income and pay taxes on it, just like anyone growing tomatoes or tobacco. “To have these people coming out of the closet after so many years, that’s the really heartening thing about what’s happening right now,” Kathleen says.

Since marijuana farmers have begun selling exclusively to legitimate dispensaries, the underground market for illegal weed has been quashed, putting drug dealers out of business for lack of available stock. One such dealer I talked to in Boulder, who I will call Quark at his request, told me that with the supply of high-quality Colorado hydroponic weed redirected to dispensaries, he has only been able to procure cheap Mexican schwag for the past few months. Since the implications of indirect association with brutal Mexican cartels unsettles him, Quark is currently seeking a regular job so he will have money to pay tuition this year. Though it has negatively impacted his own solvency, Quark has nothing but praise for the new phase in Colorado’s marijuana industry. His only concern is that the change in employment status will burden his study time as he nears completion of his advanced degree in astrophysics.

Opponents of legalization/decriminalization of marijuana–medicinal or otherwise–argue that legitimizing the industry will lead to increased usage by young people, though rational analysis and official statistics indicate otherwise. California examined the issue a decade after their 1996 legalization of medicinal marijuana. The state attorney general discovered that over the previous ten years, teen usage had declined dramatically, at a rate much faster than the national trend. As compared to California statistics pre-1996, different teen age groups evidenced 25 to nearly 50% fewer numbers reporting that they’d used marijuana in the previous month.

I would bet that one could find their way to a pot dealer on any college campus in this country by asking the first three people you meet where to procure ganja. Considering the prevalence of the underground market, legitimizing the business has the effect of tightening controls over it, regulating who can legally purchase, sell, or grow it, which puts unscrupulous drug dealers out of business, this reducing the availability of product through any but official channels. The controls that come with legalization effectively reduces its availability, rather than the contrary.

Kathleen acknowledges that the cultivation and sale of marijuana has been a thriving underground industry for decades in her tiny mountain town about 15 miles west of Boulder. “It’s always been happening; it’s just not been taxed until now,” she says. The massive blackmarket is emerging into the light, though the Colorado Department of the Revenue says they have no plans to keep track of how much money the rapidly growing legitimate industry will be feeding into state coffers. The largest dispensary in the state, serving 1400 patients in Colorado Springs, generates $30,000 per month in sales tax revenue for the state. “And now that the legal dispensaries have killed the underground market, it will only get bigger,” Kathleen predicts.

For her own ambition, that is most certainly the case. One Brown Mouse currently corners the medicinal marijuana market in Nederland, though half a dozen more dispensaries are preparing to open there in the coming months. Kathleen represents the leading edge of a growing movement of ganjapreneurs, and wants to carve out a substantial market share before the field becomes crowded with ambitious latecomers. Her fine-tuned business acumen, clearly unharmed by decades of casual marijuana use, recognizes the much larger market for her goods lies thirty minutes east in Boulder.

So Kathleen now has a business partner, with whom she has secured a 3-story 7,000 square foot building zoned for retail in Boulder. The opening of her new medicinal marijuana megastore is slated for October. Much more than simply a dispensary, Kathleen says her new “cannabis center” will sell growing equipment and art created by her patients. It will also offer a schedule of classes on cultivation techniques, and a club where those with the right paperwork can hang out, have a coffee, and smoke a joint or eat a “space cake” with friends. She even got a florist license so she can display and sell live marijuana plants, which will be a first for Colorado when she opens her doors.

Not only will Kathleen’s cannabis center be feeding state coffers with tax revenue, but it will directly create jobs for those employees she will have to hire to run the complex operation. Further, the economic ripple from such an operation will generate business for gardeners talented in the delicate process of nurturing baby marijuana clones and bakers specialized in creating snacks infused with cannabis.