A trio of drug smugglers who swallowed 2kg (4.4lbs) of cannabis resin have been jailed. 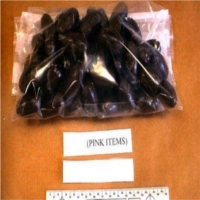 The three were caught at Bristol Airport on March 18 after arousing the suspicions of Customs officials, who noticed they had returned from Malaga, Spain, via Tangiers in Morocco, a popular destination for cannabis couriers.

An X-ray scanner then showed the haul inside their bodies – a total of 253 packages of cannabis resin with an estimated street value of £5,785.

Daniel Pink, 39, from Cornworthy, Totnes, Devon, pleaded guilty at Isleworth Crown Court to smuggling cannabis into the UK and was sentenced to 10 months’ imprisonment.

Riddiough had concealed 105 of the packages, Clark had 98 and Pink 50, which they passed in front of Customs officers.

“It is unusual for cannabis packages to be swallowed and smuggled internally, a method more popular with heroin and cocaine smugglers.

“However, our investigators and officers are alert to this method of smuggling and will not differentiate when preparing cases for court.

“We will continue to work closely with our UK Border Agency colleagues to root out these criminals.”