Sunday, 5 February 2023
You are here: Home Tally Of All The People Who Have Ever Died From A Marijuana Overdose 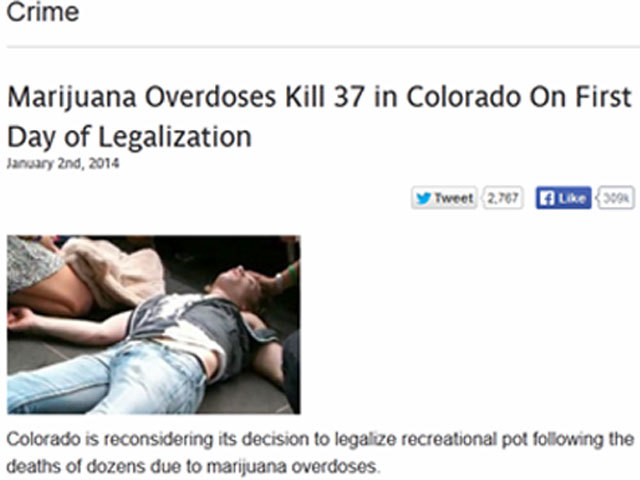 With recreational pot now for sale in Colorado and widespread confusion over a recent satirical story that jokingly claimed 37 people had already died of a marijuana overdose, we figured it might be about time to update our weed death count.

Yeah, not a single person has ever died from a weed overdose. According to one frequently cited study, a marijuana smoker would have to consume 20,000 to 40,000 times the amount of THC in a joint in order to be at risk of dying.

Last summer, Attorney General Eric Holder announced that the federal government wouldn’t intervene as Colorado and Washington state implement plans for a system of legalized marijuana for adults. The decision opened the floodgates for other states to pursue similar legalization efforts and outraged police groups apparently not excited to see a shift away from the failed war on drugs.

In a joint letter written to Holder at the time, law enforcement organizations warned that his move would lead to more crime, violence and even death.

While high driving may be a concern, Colorado, Washington and federal authorities have all taken steps to keep people off the road after using marijuana. The two states both have their own restrictions, and Holder said in his statement that the DOJ would still prosecute individuals or entities to prevent “drugged driving.”

The police groups also made a number of additional controversial claims that marijuana use itself leads to violent behavior, suicidal thoughts and interest in harder drugs. Scientific studies have not been able to prove this causation conclusively, however, and research has also suggested that THC has significant therapeutic value to patients suffering from cancer, AIDS or glaucoma.

None of this is to say that the nation doesn’t struggle with broader issues of drug and alcohol abuse and overdose. Drug policy reformers and activists gathered around the world last year to discuss the overdose epidemic. In 2010, overdoses were responsible for 38,329 deaths. Sixty percent of those were related to prescription drugs. In the same year, a total of 25,692 persons died of alcohol-induced causes, including accidental poisoning and disease from dependent use.

This piece was originally published in September 2013.