Sunday, 5 February 2023
You are here: Home (CAN) There’s no business like grow business

Sam Mellace has possibly the most sophisticated marijuana growing operation in British Columbia. 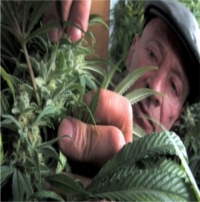 An outspoken advocate for medicinal marijuana, the former Ontario resident with a criminal record is running an industrial-style production line yielding around seven kilograms of marijuana every four to six weeks. His custom-designed building with around 250 plants in various stages of growth has been set up as a prototype to illustrate what could be done. This is the future, Mr. Mellace says.

He talks of opening his own brand of clinics across Canada specializing in pain relief through medicated marijuana creams, cough candies and cookies. He hopes the company will eventually provide medical-marijuana products to stores such as Shoppers Drug Mart to dispense to customers with prescriptions. He also says New Age Medical is doing the paperwork to capitalize on a shift in policy in the United States under President Barack Obama that will stop federal prosecutions of medicinal-marijuana users.

“This would keep [marijuana] away from the street,” Mr. Mellace said before taking a Globe and Mail reporter inside his marijuana growing operation in this isolated mountain valley about 100 kilometres from downtown Vancouver. “You would go to your doctor, get a prescription, go to a drug store [or clinic].”

Mr. Mellace has been walking with an extra spring in his step since a decision of the Supreme Court of Canada last month. The court refused to hear an appeal of a lower court decision that struck down as unconstitutional a federal regulation permitting a grower to provide marijuana for only one person. Health Canada has not yet indicated whether it intends to introduce new regulations; the department did not respond to repeated requests for an interview with an official.

Alan Young, an associate professor at Osgoode Hall Law School who was involved with the recent landmark case, said the court ruling means the government cannot rely solely on the monopoly it created for the distribution of medicinal marijuana. “It is now a question of political will to comply with the court,” he said in an interview.

Mr. Mellace said the court decision means he could help more people. He has played a part in setting up marijuana growing operations of various sizes for licensed users at six different sites.

“I’m constantly expanding,” he said, adding that he could help provide medicinal marijuana to all 3,000 people currently licensed by Health Canada to possess the drug for medical purposes.

Mr. Mellace knows the drug world from both sides of the street.

His life spun out of control after family members died in the mid-1970s, he said in an interview in his kitchen. He was in his mid-20s, living in Toronto. He started drinking heavily and became involved in drugs. “I just had that attitude … I did not care,” he said.

He dealt drugs on the street and had several run-ins with police. “I was a revolving door,” he said, describing his numerous appearances in court. He said he was convicted of impaired driving and possession of illegal drugs. He served 30 days on an extortion conviction.

His last bout of trouble was in Ontario in the early 1990s, when he was charged with conspiracy to traffic in a narcotic. He pleaded guilty and was sentenced to eight years in 1994.

But that was then. “The mistakes I made in my past, I know better not to do them again,” said Mr. Mellace, who now has two grown children, a 20-year-old stepdaughter and two grandchildren.

“I’m not looking to be a politician. So as far as any dirty laundry I have, I have no problem with what I have done in the past, but I cannot live yesterday. I can only look forward to today and potentially tomorrow.”

His incarceration in a federal penitentiary changed his life, Mr. Mellace said. “I was surrounded by murderers, rapists, violent people. It was an eye-opener for me, seeing things that happened to people while incarcerated.” He said he now wants to keep his distance from anything illegal. “I do not want to go back to the penitentiary,” he said.

Mr. Mellace was released on parole in B.C. in 1999. During a visit back to Ontario a few years later, he heard about compassion clubs that were providing marijuana to people with certain medical conditions. The federal government had a program to licence designated growers. Mr. Mellace thought his criminal record would disqualify him from obtaining a grower’s licence.

Then on July 25, 2002, he was in a two-car accident in Surrey. He survived, but sustained neck, back, hip and head injuries. He began having migraine headaches, nausea, vomiting and vision problems. Drugs prescribed by his physicians led to further complications, including a liver disorder. “At the time it did not matter that I was addicted [to prescription narcotics]. I just needed to get rid of the pain,” he said.

A search on the Internet turned up the idea of marijuana butter for pain relief. “That’s where the Health Canada program [for medicinal marijuana] came up,” he said. The federal program allowed him to grow marijuana for his own use. Federal regulations also permitted three growers to put their resources together to run a co-operative operation. Although his criminal record disqualified him as a designated grower for someone else, he met requirements for a licence to possess and grow marijuana for himself and with others.

Mr. Mellace bought a secluded rural property in 2004. He started construction of a building for his marijuana growing operation two months later, after receiving his licence to possess marijuana. A carpenter by training, he was familiar with all aspects of plumbing and electrical work. He consulted with people in B.C. who had more than 30 years experience growing marijuana and gave him pointers on how to do it.

Mr. Mellace describes the non-descript building on his property as a “cutting-edge” research and development centre. He insists everything complies with or exceeds Health Canada regulations. Working with others, he is experimenting with six different strains and various growing conditions in climate-controlled rooms. B.C.’s prince of pot, Marc Emery, has said Mr. Mellace’s operation was the biggest he had ever inspected.

Guard dogs, a chain-linked fence, motion sensors and surveillance cameras are intended to ensure the security of the building. Inside, the plants, all clones, are grown in water filled with lava rocks. Nutrients and fresh water are fed to the plants through tiny hoses that are automatically monitored and adjusted. Several 1,000-watt bulbs mimic sunlight for 12 hours a day.

The plants are moved along a line in the so-called vegetative room as they grow bushier and taller. After four months, they are transferred to a cooler flowering room. After another two or three months, the leaves are clipped and composted. The flowers are dried out in a trailer across the roadway.

Mr. Mellace says he is experimenting with six different strains.

“We’re trying to find exactly what [each plant] can do. Some are more neurological, for migraine headaches. Others give a ‘body high,’ ” he said.

The flowers are ground into powder and turned into butter that can be used in baking or cooking, for gravy, spaghetti sauce or frying eggs, as hand cream or cough candies. “You figure what ratio of pain tolerance you need, you measure it to your own levels,” he said.

“Instead of taking Tylenol 3 or Percocet for your pain, you can have a cookie and a coffee or tea, and you will feel pain free.”

Mr. Mellace anticipates the federal government will eventually issue new regulations in response to the most recent court rulings. “Our fight is to become the private sector,” he said. “We want to be regulated, we want quality control to make sure people get the right product.”

The federal government has been a reluctant participant in the world of medicinal marijuana. Possession, sale and production of pot continues to be illegal in Canada and millions of dollars are spent annually on enforcing the laws. Possession of medicinal marijuana became an exception to the law as a result of court rulings. Here are three landmark court cases that forced Canada to change its drug laws:

The Ontario Court of Appeal upholds a ruling by a trial judge who accepted evidence from doctors and experts that smoking marijuana had a therapeutic effect for those who suffered from epilepsy. The trial judge decided that denial of access to marijuana was an infringement of constitutional rights and granted an exemption from the Controlled Drugs and Substances Act. The appeal court suspended its ruling for a year to enable the government to change the rules.

July 30, 2001: The federal government introduces Canada’s first regulations to allow possession for medical use of dried marijuana. But the only legal source of the drug was by growing your own or designating someone who could not be compensated and could not produce for more than one person.

The Superior Court of Ontario says the regulations were so restrictive as to force many to obtain marijuana on the black market. The court rules that medical users were entitled to reasonable access to a substance the government acknowledges they may possess.

Oct. 7, 2003: The Ontario Court of Appeal upholds the lower court ruling that provisions restricting producers to growing for only one user and to growing with no more than two others were unconstitutional.

Dec. 3, 2003: The government maintains the regulations but begins offering dried marijuana grown in an abandoned mine shaft in Flin Flon, Man., to licensed medical users.

The Federal Court of Canada, in a judicial review of a ministerial decision, rules that a decision to disallow an organization from producing medical marijuana for sale to more than two people was unconstitutional.

April 22, 2009: The Supreme Court of Canada declines to hear appeal. Health Canada has not yet responded.

Possession, sale and production of marijuana in Canada remains illegal. However, Health Canada provides an exemption for compassionate end-of-life care and for treating symptoms associated with several conditions, including severe pain or persistent muscle spasms from multiple sclerosis, spinal cord injury or spinal cord disease; severe pain, nausea or anorexia from cancer or HIV/AIDS infections; and severe pain from forms of arthritis or seizures from epilepsy.

Health Canada also exempts those who have debilitating symptoms of other medical conditions that do not respond to conventional treatments. Those who qualify require a doctor to verify the medical problem and prescribe the usage. In some cases, specialists are required to prescribe the drug. The users are also required to obtain a licence from Health Canada.

The government suggests three sources for medicinal marijuana: Buy the weed grown for Health Canada in a mine shaft in northern Manitoba, grow your own or designate someone else to grow it for you. Those who grow marijuana must be licensed by Health Canada and meet security requirements to prevent loss or theft. The government also regulates the amount of marijuana that can be grown and stored.