Three men have been arrested and charged after a small cannabis farm was discovered under an Edinburgh pub. 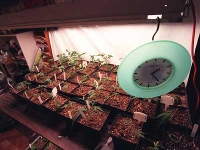 Police said that £52,000 worth of cannabis plants were recovered during an operation at the Bonnington Bridge Bar in Newhaven Road.

Officers discovered more than 350 plants in a cellar beneath the bar, along with cultivation equipment.

Three men, aged 53, 51, and 41, are due to appear at Edinburgh Sheriff Court later in connection with the discovery.