SAN FRANCISCO — California’s medical marijuana law survived its most serious legal challenge Monday as the U.S. Supreme Court denied appeals by two counties that argued they were being forced to condone violations of federal drug laws. 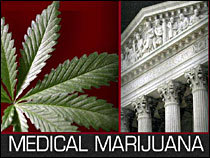 The justices, without comment, denied a hearing to officials from San Diego and San Bernardino counties who challenged Proposition 215, an initiative approved by state voters in 1996 that became a model for laws in 12 other states. It allows patients to use marijuana for medical conditions with their doctor’s recommendation.

The counties specifically objected to legislation requiring them to issue identification cards that protect holders from arrest by state or local police for possessing small amounts of marijuana for medical use.

The cards are objectionable because “the state law authorizes individuals to engage in conduct that the federal law prohibits,” said Thomas Bunton, a lawyer in the San Diego County counsel’s office. “We are disappointed that the court did not take the case to resolve what we believe was a conflict between federal and state law.”

“This was the most threatening case to state medical marijuana laws, the only one that tried to invalidate state laws,” said attorney Graham Boyd of the American Civil Liberties Union, which represented patients and advocacy groups in the case.

“No longer will local officials be able to hide behind federal law and resist upholding California’s medical marijuana law,” said Joe Elford, lawyer for Americans for Safe Access, which also took part in the case.

He said the order should strengthen his group’s case against the two counties and eight others that have refused to issue the identification cards. Bunton said San Diego County supervisors would take up a resolution approving the cards in light of Monday’s order.

The Supreme Court has ruled that the federal government can enforce its laws against marijuana to prosecute users and suppliers of the drug in California and the other 12 states. The Obama administration has said it will target only traffickers who violate state as well as federal laws, although it has not stopped U.S. attorneys from raiding dispensaries that operate with local government approval.

Prop. 215 remains in effect despite federal enforcement efforts that began as soon as it passed. In the counties’ case, the court left intact a state ruling last year that said California remains free to decide whether to punish drug users under its own laws.

“The purpose of the (federal law) is to combat recreational drug use, not to regulate a state’s medical practices,” the Fourth District Court of Appeal in San Diego said in the July 31 decision.