Sana’a, Yemen – Yemeni police on Saturday destroyed 4.6 tonnes of hashish and 6.3 million amphetamine pills confiscated at border outposts and airports over the past five months.

The destroyed drugs have a total market value of 83 million dollars, according to state security chief prosecutor Saeed al-Aaqil. 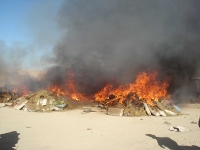 Al-Aqil told the German Press Agency dpa that 75 people, including 47 Yemenis, 12 Pakistanis, 10 Iranians, two Syrians, two Saudi Arabians, an Eritrean and an Ethiopian, would stand trial for smuggling the drugs into the country.

Yemen’s coasts are used by drug-traffickers, mainly Iranians and Pakistanis, as a gateway to oil-rich countries in the Gulf.

In March, a state security court in Sana’a sentenced a Pakistani man to death and 15 other Pakistanis to 25 years in prison after it convicted them of trafficking drugs into Yemen in September 2008.

The court found the 16 men guilty of smuggling around 10,000 kilograms of hashish into Yemen through the Arabian Sea.

Authorities have said the men were arrested in September 2008 after their boat was seized by Yemeni coast guard patrols about 50 miles off the south-eastern Yemeni port of Mukalla.

Last November, a court in Sana’a sentenced an Iranian man to death and 11 other Iranians as well as a Pakistani man to 25 years in jail over drug-trafficking charges.