EL PASO — Ex-convict Tommy Chong and his pal Cheech Marin are smoking hot, just as they were 30 years ago.
Since reuniting in September after 24 years apart, they have been selling out theaters and jokingly calling their “Light Up America” trek the “Felimony” tour.

Chong, 70, served nine months in federal prison after his 2003 conviction on a drug paraphernalia charge, and Marin, 62, went through a costly divorce. 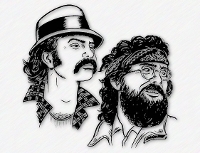 Cheech and Chong, the ’70s stoner comedy version of Hope and Crosby, will be in concert at 8 p.m.  Friday at the Abraham Chavez Theatre.  It will be their first performance in El Paso in nearly 35 years.  Chong’s wife, Shelby, will open the show.

Their tour arrives when the national debate over decriminalizing marijuana and other drugs is heating up.

California Gov.  Arnold Schwarzenegger recently called for a debate on the possibility of legalizing — and taxing — marijuana in his cash-strapped state, where medicinal use is legal.  Federal law prohibits it.

The El Paso City Council jump-started the dialogue in January when it voted 8-0 for South-West city Rep.  Beto O’Rourke’s suggestion that the federal government start “a serious debate” about legalizing drugs to help stop the drug-cartel violence that has killed more than 2,000 people in JuA!rez in the past 16 months.

Chong and Marin have followed those stories.  Chong, a member of the advisory board of the marijuana legalization group NORML, thinks O’Rourke is on to something.

“That’s what happens when you have something that everybody wants, but keep it illegal,” he said of Mexico’s cartel violence.

“You create this prohibition-style mafia, and that’s the way it goes.  It’s blind greed.  There are no rules.  That’s the problem.

“If you legalize it, at least you eliminate that huge problem of law enforcement.  Now you’ve got a cap on it.”

“The thing about our humor is it was a gentle approach.  It wasn’t a militant approach.  And it’s still working,” Chong said.  “It’s what’s made us last all these years.  We weren’t fighting a war.  We were showing people how life really is.”

O’Rourke said he has studied drug legalization more intensely since he created a media firestorm by adding his amendment to a series of recommendations by the Border Relations Committee to address drug-related violence.  He says decriminalizing marijuana might hurt cartels.

“There’s no true way to know, because it’s a non-reported black market, but people say that 50 to 75 percent of the cartels’ revenues are dependent upon marijuana,” O’Rourke said.  “If you take that away from them, it will at least destabilize and affect their ability to recruit new members and the kind of heavy weaponry used to outgun the Juarez police and, frankly, the Mexican military.”

In many ways, Chong became a symbol for those who say U.S.  marijuana laws are wrongheaded.

He pleaded guilty to a federal charge of conspiracy to sell drug paraphernalia after a Department of Justice sting called Operation Pipe Dreams, authorized by then-Attorney General John Ash croft.  A total of 55 people and businesses suspected of selling drug paraphernalia were charged, Chong being the most famous.

Chong’s Nice Dreams Enterprises was the main investor in son Paris Chong’s Chong Glass, a line of bongs and water pipes sold on the Internet.  Federal prosecutors said they pursued the comedian instead of his son for a couple of reasons.

“Tommy Chong was the more responsible corporate officer because he financed and marketed the product,” U.S.  Attorney Mary Beth Buchanan, whose Pittsburgh-based staff prosecuted the case, told LA Weekly in 2003.

At Chong’s sentencing on Sept.  11, 2003, Assistant U.S.  Attorney Mary McKeen Houghton said the raid on Chong’s home earlier that year turned up nearly a pound of marijuana, for which he was not charged.  Prosecutors said they were more concerned that he glorified and profited from drug use.

Chong “used his public image to promote this crime” and market products to children, Houghton said at the hearing, according to the Pittsburgh Post-Gazette.

Chong accepted a plea agreement, sparing his wife and son from prosecution.  Part of this was an admission that Nice Dreams ( named for a Cheech and Chong movie ) distributed 7,500 bongs and pipes through the Internet, according to the Post-Gazette.

He hoped for a community service sentence, but was ordered to a minimum-security prison, fined $20,000 and forced to forfeit $103,514 in cash, plus all of the paraphernalia seized from a raid on Chong Glass near his home in Pacific Palisades, Calif.

O’Rourke said he saw no justice in Chong’s case.

“Tommy Chong’s prosecution in Pennsylvania is a case in point on the failure of this drug war,” said O’Rourke, who grew up watching Cheech and Chong movies, but said he does not smoke marijuana or advocate its use.  “We’ve spent millions …  basically to prosecute a comedian using his name and visibility to market bongs through the Internet.  If that’s not a waste of resources, I don’t know what is.”

The Cheech and Chong tour, which stretches into September, is expected to produce a live concert DVD ( filmed in March in San Antonio ), animated DVDs of some of their ’70s albums and a film Chong described as “‘Up in Smoke’ revisited, 30 years later,” a reference to their hit 1978 movie.

Drug-sniffing dogs were dispatched to two Austra lian theaters where Cheech and Chong performed last month.  It was the start of a bad memory for Chong.

“I felt like an Auschwitz survivor where they bring out the dogs and I think, ‘Oh, Lord, I hope I don’t have anything I forgot,’ ” he said.  “You keep your guard up nowadays.”

Neither Chong nor Marin was arrested or charged with anything in Australia.

Marin says the duo has a new appreciation for its place in comedy history.  “I look back and there’s no other comedy team in history that I can think of — not Laurel and Hardy, Abbott and Costello, Martin and Lewis — who after 30 years apart come back and put a cap on their career triumph.”

Chong said the success of the reunion has given him some distance from his legal troubles.

“I get a laugh out of it now because it went from the bottom, no hope, to wow, this is something else.  I’m amazed all the time, and thankful, by the way.

“I give thanks every day.  There’s nothing that bothers me now.  It’s a plus.”