ASHLAND — The nondescript white building in unincorporated Ashland has iron bars on its windows and the look of a bunker. An American flag hangs next to a blue awning above the glass front door that faces out onto busy East Lewelling Boulevard. 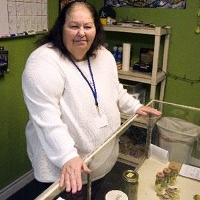 No signs or markings indicate what type of establishment operates in the building. Yet, on a typical weekday afternoon last week, a steady stream of mainly young men moved in and out of the front door.

The establishment is called We Are Hemp, and it is the last medical marijuana dispensary left standing in unincorporated Alameda County.

“There’s a stigma about this,” said Adele Morgan, 70, the dispensary owner. “But I think we’re a very respected club, to tell you the truth.”

When entering the front door, a large man with .40-caliber pistol on his hip greets you with a smile. In the waiting room, another armed guard logs in customers on a form on a clipboard.

If you are a regular customer — or member — you are escorted to the dispensary in the back, where, underneath a glass counter, pipes are lined up next to jars filled with green marijuana buds. Two “budtenders” — Jason, 23, who declined to give his last name, and Scott Oh, 24 — will help you with your selection of premium, high-grade or mid-grade marijuana.

If you’re a new customer, you must provide a copy of a recommendation from a doctor and fill out the proper forms. You are photographed and given a membership card, and then you can make your purchase.

The place is clean and has the vibe of a clinic, except in the dispensary, where hip-hop art hangs from the purple walls. Flat-screen televisions throughout the facility provide live feeds from all the rooms and from the front entrance for security purposes. A break room in the back serves the eight employees.

Morgan says her establishment serves about 1,000 members, who are allowed to buy up to 3 ounces of pot every 30 days, at a cost of $320 to $340 per ounce, depending on the variety.

Morgan is a retired nurse who worked for 30 years at Kaiser Permanente Medical Center in Hayward and worked for 12 years as a probation officer for the Alameda County Probation Department. She has a master’s degree in educational psychology from Cal State East Bay.

In retirement, she opened We Are Hemp as a retail store selling hemp products, converting it into a dispensary in 2005 after receiving one of three medical marijuana permits issued in unincorporated Alameda County.

She calls We Are Hemp a mom-and-pop operation, and says her employees are like family. Her son, Mike Morgan, 31, is her business partner who takes care of most of the day-to-day operations. The employees are all close friends of Mike and Adele Morgan.

While Morgan has a permit from the county and says she obeys state law and the county’s medical marijuana ordinance, her dispensary remains illegal under federal law. Her two Hayward-based competitors were shut down after raids by the federal Drug Enforcement Agency. The Compassionate Collective of Alameda County was raided in 2007 and its owners are facing federal charges. The Garden of Eden shut its doors after a DEA raid in 2008, but retains its permit.

Last October, We Are Hemp was raided by the DEA, though no charges resulted. Morgan has also endured scrutiny and frequent walk-throughs by Alameda County sheriff’s deputies.

Morgan says the Obama administration’s recent statements that DEA raids on marijuana dispensaries will cease is a good sign. For her, marijuana is a medicine.

“It’s been around for a long, long time, but it’s been labeled as a bad thing,” she says.

She is a diabetic, with a heart condition and nerve problems in her legs.

“Sometimes the pain is so bad, I can’t stand it,” she says. “I have my little bit of marijuana and my therapeutic pool — that’s what keeps me going. I take my little pipe, smoke a little, then I rest peacefully every night.”

Morgan is hoping that new attitudes from the government will allow her to continue her operation on a busy commercial corridor that straddles Ashland, Cherryland and San Lorenzo.

However, local homeowners could become an obstacle.

At a special meeting with the county Board of Supervisors in San Lorenzo last month, an overwhelming majority of speakers made clear that they do not want medical marijuana dispensaries in their neighborhoods. Concerns were raised about marijuana getting into the hands of children, the number of dispensaries allowed and in what locations, crime, and that the young men who frequent the dispensaries are “thugs” who are not purchasing marijuana for medical purposes.

Some speakers said that if medical marijuana is to be legal, it should be dispensed in county clinics or in pharmacies — although Supervisor Nate Miley explained that this is unlikely because marijuana remains illegal under federal law.

The Board of Supervisors held the meeting to provide community input to County Counsel, which is redrafting the county’s marijuana ordinance. Last August, state Attorney General Jerry Brown released new guidelines concerning medical marijuana, requiring dispensaries to operate as statutory cooperatives or collectives that are not for profit. County Counsel is rewriting its medical marijuana ordinance to be in compliance with the new state guidelines.

The supervisors will return to San Lorenzo in the summer for community input on the draft of the new ordinance, which is expected to go before the board in the late summer.

“Supervisor Miley believes that qualified patients with a doctor’s recommendation should be able to obtain medical marijuana in a safe, clean place,” said Bob Swanson, a constituent liaison for Miley — the most vocal supporter of medical marijuana on the board. Negative concerns regarding the dispensaries are overstated, Swanson said.

“Anything that I have ever asked of the medical marijuana dispensaries, they have complied immediately,” Swanson said. “They want to work with government, not against it.”

Wulf Bieschke, president of the San Lorenzo Village Homes Association, said the issue is not whether marijuana should be legal, but how the dispensaries affect the community.

“We’re trying to redevelop our downtown area. We’re having a hard time getting businesses to come already,” he said. “With the stigma of medical marijuana out there, I think it’s going to give them another reason not to come to San Lorenzo.”

At the special meeting, Deputy Paul Liskey told the audience that dispensaries lead to an increase in crime and that the Sheriff’s Office is philosophically opposed to them.

“We are there to enforce the laws, and there are conflicting laws,” sheriff’s spokesman Sgt. J.D. Nelson said. “We’re not advocates in one way or the other. We get a lot of complaints from neighbors about the marijuana clubs. Neighbors complain that unsavory characters come there that don’t look like they need medical care. The neighbors feel that this is nothing more than legalized drug dealing.”