Thursday, 2 April 2020
You are here: Home Marchers Want To See Laws On Marijuana Go Up In Smoke

Protesters marched along Penticton’s Main Street Saturday afternoon, demanding the federal government relax laws on marijuana use.
One or two could be seen lighting up, sending the smell of cannabis wafting through the air as about 30 placard-bearers made their way to MP Stockwell Day’s office.  There, they lined both sides of the road as motorists passed by, some honking their horns in support.

Amanda Stewart, who got the protest rolling, said many people in the Okanagan want the government to pass more-liberal laws with respect to marijuana. 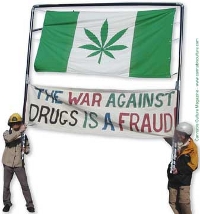 “I don’t pretend to have a solution, but the way we’re going now isn’t working,” she said.

Decriminalizing what she calls “a herb” would reduce policing, judiciary and prison costs, which are all borne by Canadian taxpayers, she said.  It would also cut down on hardships, such as families breaking up, along with the strain on social services that can result from people being convicted for using or possessing marijuana.

Those relying on marijuana for medicinal purposes often end up suffering because they have difficulty acquiring it on a regular basis under current laws.

The theory that marijuana is a “gateway drug” leading people to harder drugs and to a life of crime fuelled by their addiction doesn’t wash with Stewart.

“Most of those studies don’t look at alcohol, tobacco or prescription drugs,” she said.  “They’re ignoring that they are the drugs that people try before ( marijuana ).”

Stewart noted that while people with addictive personalities must distance themselves from these types of substances, she knows no one who has succumbed to addiction and experienced the downward spiral that is the primary argument in the gateway theory.

Making marijuana legal would also remove it from the hands of drug dealers and organized crime syndicates in the “black market economy,” she said.

Stewart and her co-marchers are planning to collect signatures asking for a change in marijuana legislation and then send them to Prime Minister Stephen Harper for his consideration, although she isn’t optimistic change will occur under his Conservative government.

“I think our best chance to change laws is to vote in candidates who put this in their platform,” she said.